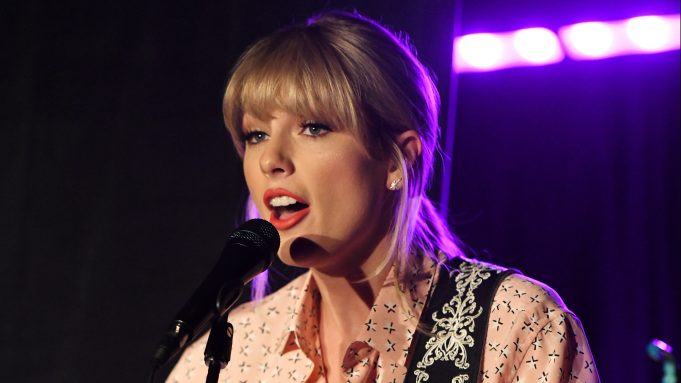 Taylor Swift is doubling down on her pro-LGBT activity during Pride month: Less than 24 hours after she dropped her new single “You Need to Calm Down,” which includes shout-outs to GLAAD and the LGBT community, she made a surprise appearance before about 100 people at the Stonewall Inn in New York’s Greenwich Village, the site of the pivotal 1969 riots that launched the gay rights movement.

After a rousing pair of songs from Sara Bareilles — including a version of “Brave” that had virtually all of the 100-odd lucky people inside singing along — Swift was greeted by the evening’s headliner, “Modern Family” star Jesse Tyler Ferguson.

She thanked him for inviting her and said, “I heard this is Jesse’s favorite song to do at karaoke — which is an incredible rumor, I really want to believe it’s true,” she laughed and then turned to him. “So if there’s anything you feel like you want to jump in on, a part that you’re really good at, just sing, dance and be yourself — this is a really safe space!” She then launched into the song — watch it in the clips above and below.

Before Swift performed, AEG, which co-hosted the event, presented Stonewall with a $50,000 check to support its Stonewall Inn Gives Back Initiative’s (SIGBI) development of an LGBTQ+ anti-bias training standard in conjunction with anti-bias training experts. The standard is designed to ensure that all people are treated equally in public spaces regardless of gender, gender expression or gender identity. On June 14, AEG and SIGBI are partnering with Hawkins Mikita, Spring Place and Tie the Knot to host the first annual SIGBI Summit luncheon in New York.

Madonna gave a surprise performance at Stonewall on New Year’s Eve, commemorating the beginning of the 50th anniversary year of the riots.

In a statement released Friday, GLAAD announced that it has seen an influx of small donations in the amount of $13, likely in reference to Swift’s favorite number. The organization has started a Facebook fundraiser for fans to support its LGBTQ advocacy work for Pride month (choosing $1300 as a goal).

“Taylor Swift is one of the world’s biggest pop stars,” said Anthony Ramos, director of talent engagement at GLAAD. “The fact that she continues to use her platform and music to support the LGBTQ community and the Equality Act is a true sign of being an ally. ‘You Need to Calm Down’ is the perfect Pride anthem, and we’re thrilled to see Taylor standing with the LGBTQ community to promote inclusivity, equality, and acceptance this Pride month.”

Earlier this month, Swift urged her fans to contact senators in her home state of Tennessee and elsewhere to demand passage of the Equality Act. Later that night, she made a similar appeal at an iHeart Wango Tango concert in Los Angeles, appearing in full rainbow garb, leaving fans to wonder whether the fringe of many colors might make its way into the next video.