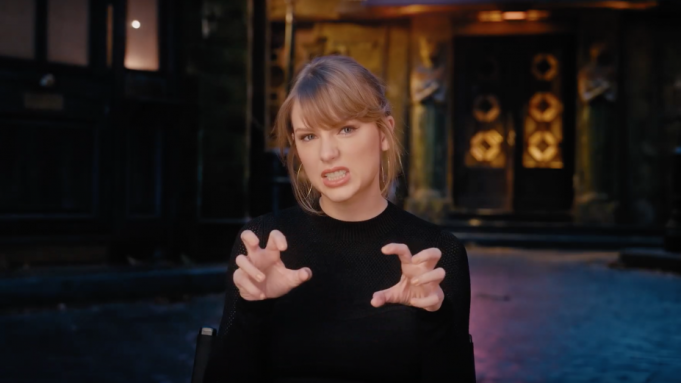 Taylor Swift fans finally get to see some of the results of all those years spent studying her roommates Meredith and Olivia — and also, not incidentally, some time with a choreographer — in a new behind-the-scenes teaser for the movie “Cats.”

The three-and-a-half-minute featurette has footage of Swift striking crouching feline moves as well as doing some decidedly human-style twirling with fellow cast member Idris Elba. Fellow pop-star/actors Jennifer Hudson and Jason Derulo also show up in the production and interview footage, as do Judi Dench, James Corden and Rebel Wilson.

“My first memories of performance go back to Pennsvlvania when I was growing up,” Swift says in the making-of. “My favorite thing was getting to be theatrical, to tell a story, and I’ve always brought that sort of narrative element to my life shows.” Speaking of which: “I came right off a (“Reputation”) stadium tour and right into rehearsals” last December, she points out. “It’s people coming together through all different corners of entertainment… Everybody’s working really long hours, rehearsing every day — and it’s fun.” Of the original Andrew Lloyd Webber musical, Swift says, “We got to update it in ways that I think are just so, so great.”

Personal revelations are few in the quick clip, but Dench gets in the best very-short-form storytelling. “I was cast in 1981,” says the actress. “Just before we opened, I snapped my Achilles tendon, and I thought that that was my history with ‘Cats.’ But it turns out not to be.”

There is no footage, it should be said, of anyone in a cat costume … but director Tom Hooper’s discussion of how the look of the characters was achieved may lead you to believe that not much of that footage exists, with the actors apparently spending far, far less time in fur and makeup than their Broadway predecessors. “We’ve used digital fur technology to create the most perfect covering of fur,” Hooper says.

The featurette isn’t just a teaser for the film, but a teaser for a teaser: At the end of the clip, a card announces that a trailer for the movie is due Friday. Swift has also been promoting the impending trailer from her social media accounts.