Francesca Hayward sings "Beautiful Ghosts" during the film, and Swift's studio version will be heard over the end titles. 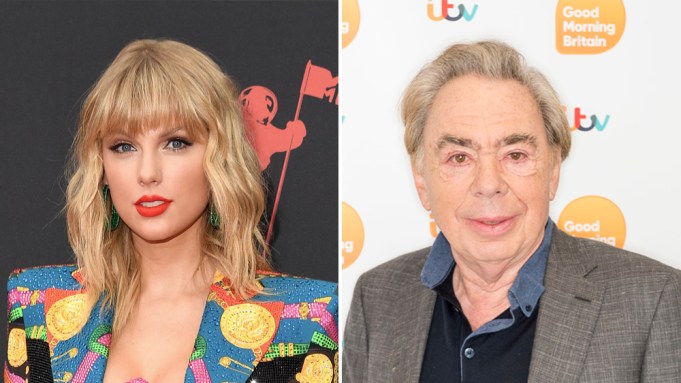 When Andrew Lloyd Webber and Taylor Swift had the opportunity to write a song together for “Cats,” they, well, pounced on it.

“We wrote 90 percent of it pretty much over an afternoon,” Lloyd Webber tells Variety about his and Swift’s fast-combusting collaboration on “Beautiful Ghosts,” the one brand new song written for the forthcoming movie adaptation of the 1981 stage musical.

They didn’t actually meet up with the intention of writing a new song… at least, not ostensibly. Swift had gone over to Lloyd Webber’s last December during filming to rehearse her performance of a song she sings in the film, “Macavity the Mystery Cat,” in her supporting role as Bombalurina. But at some point in the afternoon the fact that Lloyd Webber had written the instrumental basis of a new song came up. He played it on the piano, she began improvising lyrics and topline vocal elements, and the song now dubbed “Beautiful Ghosts” was nearly done.

“Taylor got to the essence of what the piece is about. It’s not an ordinary lyric,” says Lloyd Webber, who adds that director Tom Hooper considered her attempt “absolutely extraordinary, because it’s as if she really has understood the central message of the piece.”

It’s said to appear at least three times in the movie. “Beautiful Ghosts” is initially sung halfway through the film by Francesca Hayward, who plays Victoria, the white cat that has been made a central figure in the reimagining of the 1981 stage musical. It reappears later in a brief reprise, sung by Judi Dench, as Old Deuteronomy. Finally, Swift herself will be heard performing it under the end titles.

Is Swift’s closing studio rendition a “pop” version? No — sources who’ve heard it say her recording is very much in keeping with the spirit of the rest of the musical, not positioned as a hit single.

News of the collaboration satisfies ongoing curiosity on two fronts: how Swift, arguably the biggest pop star in the world, might play a greater musical role on a film project in which her character is not necessarily the lead; and whether any fresh material would be added to the nearly 40-year-old score that might make “Cats” eligible for best song at the Oscars or Globes. (Lloyd Webber won an Oscar in 1997 for a new song he and Tim Rice wrote for Madonna to sing in “Evita.”)

It doesn’t hurt that the movie has some fresh musical material that will be awards-eligible. But there was a much more compelling reason than that to write a new song for the film: Without one, it would have been a movie musical in which the main character doesn’t sing. The “white cat” exists primarily as a ballerina figure on stage. In the movie, boosted into a central role, Victoria certainly needed to express herself in song, or audiences would wonder why the cat had her tongue.

“We had to have something for the white cat the sing, to have some kind of reaction to what’s going on around her,” Lloyd Webber says. “We felt there had to be a major statement for her, something that had the spirit of (T.S.) Eliot but also was specific to the story.”

In a way, it’s an answer song to the best known and loved number in “Cats,” “Memory.” In the film, as on stage, Grizabella (Jennifer Hudson) will sing that standard about her glamour days being over, Now, the white cat — abandoned as a kitten — laments that her own life has barely begun. At least you have memories, Victoria tells Grizabella, in so many words, feeling that that’s more than she has.

Victoria’s message, Lloyd Webber says, paraphrasing the lyrics, is that “I haven’t had a chance yet to dance with beautiful ghosts.” He adds, “As she goes through the song, she becomes empowered, and she says, ‘I will dance someday, and maybe they will be beautiful ghosts to me too.’”

“It’s a very sophisticated lyric,” Lloyd Webber says, “and it’s entirely written for the dramatic situation. Tom Hooper said to me, ‘It’s as if she’s been reading her T.S. Eliot without us knowing.'”

“Beautiful Ghosts” will be the only song in the score not drawn directly from Eliot’s “Old Possum’s Book of Practical Cats,” whose verse the composer set to music for the original 1981 show. In the case of “Ghosts,” the composer and Swift share credit for both music and lyrics.

Lloyd Webber stands a chance at his first Oscar since winning for “Evita’s” “You Must Love Me” if “Ghosts” comes to life with voters; it could well leap ahead in the pack in a year in which there have not yet been any clear “Shallow”-style favorites. Swift has never had an Oscar nomination, but she has been a Golden Globes or Grammy nominee all three times she’s written or co-written a song for a film. The star’s Globe-nominated songs were “Safe and Sound” for 2013’s “The Hunger Games” and “Sweeter Than Fiction” for 2014’s “One Chance.” At the 2018 Grammys, Swift was nominated for best song written for visual media for “I Don’t Wanna Live Forever,” from “Fifty Shades Darker.”

Lloyd Webber couldn’t help noticing one point of comparison with his new songwriting partner: “She’s the same age as I was when I started writing ‘Cats,'” he points out — age 29.

Asked if he and his fellow cat fancier spent any time talking about favorite felines, Lloyd Webber says, “Yes, we did talk about cats. The only thing is, at the advanced age of 71, I have actually got a puppy. So whether Taylor’s ever going to speak to me again, I don’t know.”

The song’s commercial release date has yet to be determined, although brief snippets can be heard in EPK footage released by the studio (watch it above).