There’s no question that the posthumous release is the most difficult to get right: Human beings are unpredictable, and trying to guess what a person’s intentions might have been is an uphill (if not a losing) battle. Yet posthumous releases ranging from Michael Jackson’s “This Is It” to recent Prince and Jimi Hendrix collections prove that it can be done well, and judging by an exclusive preview Variety received last week, Soundgarden’s “Live From the Artists Den” — an “immersive experience” film of a 2013 concert with dramatically enhanced sound and visuals, which premieres in Los Angeles (tonight), New York (Tuesday) and the band’s hometown of Seattle (next week) — gets it right as well.

The concert — the final North American show of the “King Animal” tour, which took place Feb. 17, 2013, also at the Wiltern Theatre in L.A. — has been released before, but never like this. According to the announcement, the event will showcase 12 high-definition camera angles customized for an immersive multi-screen viewing experience, and a live live remix of the original multitrack 48-channel audio in L-ISA Immersive Hyperreal Sound, an ultra-high resolution audio technology from L-Acoustics, will provide a live-feeling to the recording. The 360˚ real time mix will be synced to on-screen footage and further complemented by a light show.

But the thing that fans will really want to know is that it looks and sounds awesome — in many ways more immersive than an actual concert (and this writer saw Soundgarden ten times). And the Wiltern show is ideal for this treatment: Not only was it exhaustively filmed, it’s a stellar 29-song performance with nearly two-and-a-half hours of hits and deep cuts.

“We wanted to play a long set at this show — we wanted to get a lot of material in there,” says guitarist Kim Thayil. “We got to go deep into our catalog and bring out songs like ‘Blind Dogs’ and ‘New Damage’ and earlier songs like ‘Incessant Mace’ and ‘Hunted Down.’ Two and a half hours of sometimes fast, often dark songs with weird time signatures can be hard work, but fans stayed there till the end and they dug it, so it was great.”

The inclusion of deep cuts was very intentional as well, he says. “I’d rather be the guy in the crowd that turns to his friend and says, ‘I know this song — it’s the second song on side two of the first EP,’ or whatever. We think we’re very similar to the audience we wanted to build — we always wanted to be the guys who played for the people like us.”

In the demonstration, headed up by L-Acoustics’ engineer Jesse Stevens, 13 speakers were arrayed around the listeners, mostly in front but with five in the back. As the band rumbled into “Incessant Mace” (a deep cut from 1988’s “Ultramega OK”) the sound corresponded to the setup of the musicians on the screen — guitar coming out of the left side, bass out of the right, drums centered — but the sound became truly vivid when the late Chris Cornell’s vocals kicked in. They’re intensely present, as is his presence on the screen — but not creepily or morbidly so. And while it makes one sad for what has been lost, it’s also great to be able to experience the concert so vividly.

Being respectful of Cornell’s memory was something that Stevens says was key, even with regard to the audio.

“We didn’t want to be cheesy or gimmickly at all,” he said. “Even with the speakers located behind the audience, we limited it to special effects and ambiance, didn’t want to make it distracting or not feel like a concert.”

The connection between L-Acoustics and the band goes back a long way as well, according to CEO Laurent Vaissié. The technology used in the Soundgarden experience was previously used on Lorde and Childish Gambino tours, and the band had worked with the company on its last couple of jaunts. “The connecting of the dots came from [Artists Den COO] Amber Mundinger, who we knew from her previous role [at Variety parent company Penske Media],” he says. “She was familiar with the technology that we had employed at an Alt-J concert in New York last year and she thought it would be a great idea to recreate the experience of the live concert using the immersive aspects of the technology. It’s really the world’s first attempt at recreating the live concert experience from both the visual and the audio side.”

Mundinger says, “As one of the most lauded Soundgarden concerts of all time, our team envisioned recreating their Artists Den performance at The Wiltern six years ago in its entirety through an immersive, first-of-its kind experience to bring fans back to that night in a very special way. Being able to create this memorable experience has also allowed Artists Den to reimagine the nature of immersive musical events, pushing us in new directions for future artists and their fans.” 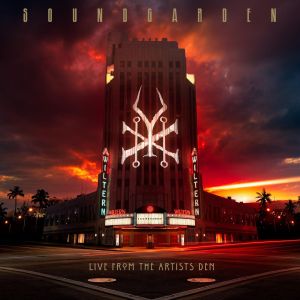 “Soundgarden: Live from the Artists Den” will also be released as an album in a variety of packages on July 26. The limited-edition “Super Deluxe” box will feature the complete 29-song concert film in 5.1 surround sound and stereo on Blu-ray, and more than 30 minutes of bonus interviews with the band, in addition to four black 180-gram audiophile LPs, 2CDs, a 40-page photo book, four band member lithos, and replica artist all-access pass and ticket stub from the original show. Additional products scheduled for release include: 4LP 180-gram audiophile black vinyl, limited edition 4LP color vinyl (each disc will feature a unique combination of splattered colors), Blu-ray and 2CD.

As for what might be coming next, “There is some live material that wasn’t released and there’s unreleased material from the Sub Pop era,” Thayil says. “But I think the most interesting and significant material would be what the band was working on in the 18 months prior to that last tour, and even during it. There was material that we were writing and demoing and recording, and it’s certainly material that could be completed. Obviously we’re limited by the [recordings of Cornell’s] vocals that we have, but the band is certainly interested in doing what it can to complete the songs.”

The event dates and full tracklist appear below.

Been Away Too Long^

Blow Up The Outside World^

Burden In My Hand

A Thousand Days Before^

Blood On The Valley Floor^