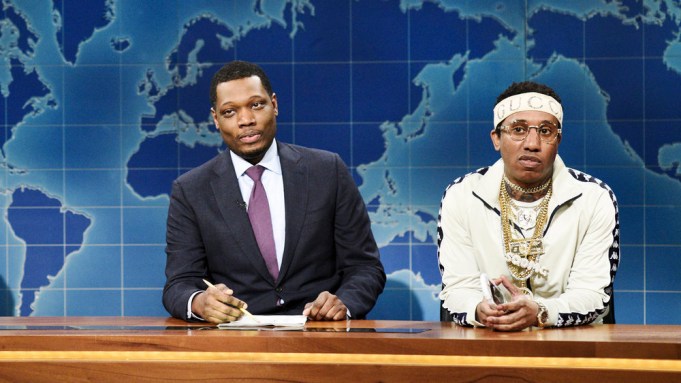 Anyone who tuned into “Saturday Night Live” this past weekend likely got a good belly laugh when Chris Redd parodied Soulja Boy during “Weekend Update.”

The three-minute clip featured Redd sporting a white Gucci band in homage to Soulja’s rant on morning show “The Breakfast Club” which went viral due to the rapper’s mocking of Tyga and Drake as also-rans who came in his wake.

Mimicking Soulja’s tone, when co-anchor Michael Che asks the comedian what his thoughts on Trump were, Redd responds, “Trump? TRUMP?! The dude that got bodied by the popular vote?”

Variety spoke with Soulja Boy about the bit as he was filming a music video in Glendale, Calif., alongside Sour Matt.

“That s— was dope,” said Soulja. “I loved it! It was amazing. I made it to ‘Saturday Night Live’ without actually having to be there physically!”

In addition, Soulja praised SNL for launching the idea of a presidential run in 2020. “They made that up on they own. I never said nothin’ about running for president, but I like the skit a lot though. It was nice.”

Speaking to Variety last week, “Breakfast Club” co-host Angela Yee said she “knew he was going to [give] a memorable interview” that would live on in viral infamy. “Just even the way he said Drake’s name and called him Aubrey will live on forever.”