Says Angela Yee of the viral interview: "I knew it would be memorable." 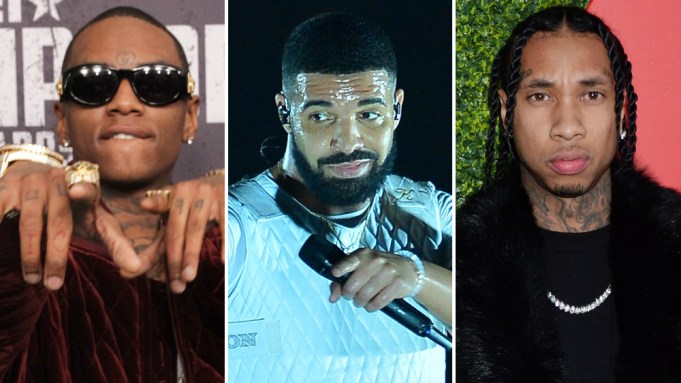 Among the jaw-dropping highlights of the hour-long interview was Soulja’s claim that Drake stole his “drip for years.”

Case closed. Drake been stealing my drip for years‼️🤷🏾‍♂️

“Drake? DRAKE?? The n—a that got bodied by Pusha T? The n—a that was hiding his kid from the world, but the world wasn’t hiding from the kid? Aubrey Graham in a wheelchair… Drake? Y’all better stop playing with me. Stop playing like I ain’t teach Drake everything he knows.”

Angela Yee, the female co-host on “The Breakfast Club,” tells Variety: “Before he came on the show, he was on his Instagram Live already turned up! So I knew he was going to [give] a memorable interview.” As for what got the biggest reaction from the show listeners (“The Breakfast Club” is syndicated by Premiere Networks to 90 markets and is simulcast on Revolt): “When he jumped out of his seat at the mention of Drake’s name as the biggest artist in the world,” says Yee. “Just even the way he said Drake’s name and called him Aubrey will live on forever.”

At one point, Soulja broke into song, asking the hosts: “Y’all ain’t hear Drake’s first song? Tell me what’s really going on Drizzy Drake back in this thing already, what’s happenin’?” The implication: that Drake copied Soulja’s flow from his own record, “What’s Happenin’,” on Drake’s 2010 single “Miss Me” featuring Lil Wayne. Said Soulja: “That’s my bar! He copied my whole f—ing flow! Word for word, bar for bar. Don’t act like I didn’t make Drake, n—a. Don’t do that.”

The conversation then segued to the topic of who had the biggest comeback of 2018 — which Charlamagne Tha God defines as a return to the charts with a massive hit. Someone like, say, Tyga.

Soulja didn’t hold back, exclaiming: “TYGA? This n—a sitting right here talking about Tyga? The n—a that lost to Travis Scott? … He had the biggest comeback? Because what, he did a record with Nicki Minaj?”

Charlamagne was referencing “Taste” with Offset, which Tyga is well-aware gives him the lead. Taking to his 5.4 million followers on Twitter, the Los Angeles rapper posts a side by side snapshot of both artists’ streaming numbers on Spotify, comparing Tyga’s 884 million to Soulja’s 98 million in 2018.

Who had the biggest comeback?! 😭😭😭 pic.twitter.com/bWS2mMZ5B4

Paying little mind, Soulja Boy reminded listeners of his biggest hits — “Crank That,” “Turn My Swag On,” “Kiss Me Thru The Phone,” “Pretty Boy Swag” — each of which have gone either Platinum or Diamond.

While it’s crazy to think this is the first time Young Drako visited the morning show at Power 105 in the eight years since its inception, Soulja details how he had to take the bullets for this new generation of rap.

“I had the biggest comeback of 2018 period. When I say comeback, I’m not meaning I fell back and had to get back on — 2016, 2017, I got into all them problems with the Migos, Chris Brown, Shia LaBeouf, this person that person, and I was presented in a way that people counted me out.” (Many of those past beefs have been resolved, he revealed, though not his latest spat with Famous Dex on Instagram Live.)

“They laughed at me!,” he continued. “They said I killed hip-hop, and now they’re doing exactly what I did and I’m being shunned upon. I’m the reason y’all doing this. I’m the reason why all these artists have social media. Y’all should thank me. Every artist in the game, all y’all record labels, y’all owe me 5% bro. Y’all gon’ respect it. Y’all ain’t gotta like me. I ain’t did nothing to nobody my whole career but try to help people and make fun music, and be this happy young kid.”

Offers Yee: “For the people who didn’t think Soulja Boy influenced so many other artists, their minds were definitely blown.”

But don’t cry for Soulja. Making good use of his time on-air, he plugged his own video game console, SouljaWatch, which he boasts has been making him a lot of money.