Looking for a Summer Hit? Put a Ticking Clock in Your Song, Plus Other Pop Signifiers

With the summer officially under way, it’s time to ponder what stands the best chance of becoming that anthem blasting out of car radios, dominating streaming playlists and capturing earbuds coast-to-coast as the weather heats up.

According to Hit Songs Deconstructed’s David Penn, who founded the music data and analytics company in 2011 with his wife Yael, this summer’s most consumed songs “will be more poppy, up-tempo, sing-able (as opposed to rap-able), hooky and love/relationship-oriented” compared to a similar period in 2018.

The company has broken down the elements of songs that made up last June’s top 10 of the Billboard Hot 100 and compared them to the same chart-holders for the first three weeks of this month. Says Penn, whose client base includes writers, producers, A&R executives, creative directors, labels and publishers (paying anywhere from $525 to $950 annually for a subscription): “We marry compositional analytics with the craft of songwriting, getting people in tune with the trends driving today’s pop music hits.”

With hybrid songs like Little Nas X’s rap-country crossover with Billy Ray Cyrus, Hit Songs Deconstructed’s founder agrees that “the blurring of genres is getting more pronounced… It’s getting harder and harder to pigeonhole songs in different categories.”

Is there any element that can be isolated in a song that can help predict its success? Penn notes that the ticking clock which helped fuel Justin Bieber’s “What Do You Mean?” to No. 1 on the Billboard Hot 100 in August 2015 has subsequently become the signature sound for Grammy Award winning producer/songwriter Zedd, who has used its motif in smash singles like Alessia Cara’s “Stay,” “The Middle,” his Grammy-nominated Record/Song of the Year collaboration with Maren Morris and Grey, and Katy Perry’s current single, “Never Really Over.”

Whether it draws you in subliminally or simply helps keep the beat, “that stylistic ‘tick-tock’ gave Zedd a signature sound, a calling card, which is also important in the hitmaking process,” explains Penn. “Think of DJ Khaled or Pitbull, who create brand familiarity by referring to themselves on each record.”

Hit Songs Deconstructed has compared this summer’s Top 10 entries with last year’s and found some palpable contrasts. Pop songs have more than doubled in the Top 10, from 29% last year to 58% this year, with hip-hop down by even more, from 57% to 25% and R&B/soul up to 17% from 7%.

— Average tempo increased by 20 BPMs compared to last year, while 75% of songs are 90 BPM or faster this summer, compared to only 21% last year

— As befits the streaming era, average song length has decreased almost 30 seconds since last year, with those under three minutes rising from 14% of the Top 10 to 50%.

— The percentage of songs with a post-chorus in their structure has almost doubled to 50%, mirroring the rise in Pop in that there are more hooks in a song for the listener to sink their teeth into.

— Choruses on streaming platforms typically hit after the 30-second mark and helps keep the listener engaged until the stream counts, which is after 30 seconds.

“We want to take all this wealth of data so that a user can make strategic, informed decisions by understanding where things have been and where they are right now,” says Penn. “As a songwriter myself, I created this because I knew nothing about what made hit mainstream songs work. This is an educational tool. It’s not about strategically mapping out every nuance of your song to the microsecond or adhering to a formula.  It’s about taking your unique creative inspiration and molding it into a song that connects with an audience. People think all pop music sounds the same, but when you really get into it, nothing could be further from the truth.”

Penn believes the kind of data generated by Hit Songs Deconstructed enhances creativity rather than pigeonholing it.

“The more tools and insights you have at your disposal, the better,” he says. “It certainly isn’t a substitute for that initial inspiration or idea, but it will give you all these different avenues to explore by channeling your talent into new directions. How hit songs connect doesn’t change. … The same thing The Beatles were doing in the ‘60s, Max Martin is doing today, even as sounds, style and technology change. … What we try to do is offer a snapshot of where things are today and where they might be headed tomorrow.”

The clock is ticking…

See some of Hit Songs Deconstructed’s fascinating research below:

Songs with only sung vocals have almost doubled in 2019, while songs with a combination of sung and rapped vocals have seen their prominence cut in half. This mirrors the rise in Pop and decrease in Hip-Hop. 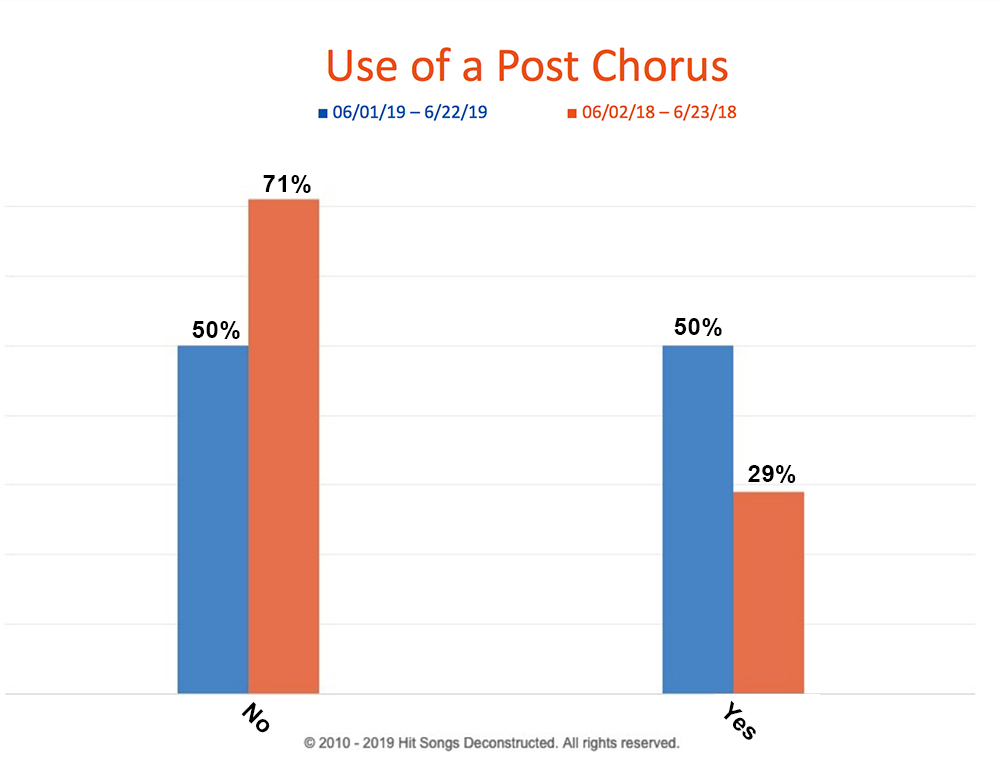 The percentage of songs with a post chorus in their framework has almost doubled in 2019 to one-half of songs. This mirrors the rise in Pop, and means more hooks for the listener to sink their teeth into. 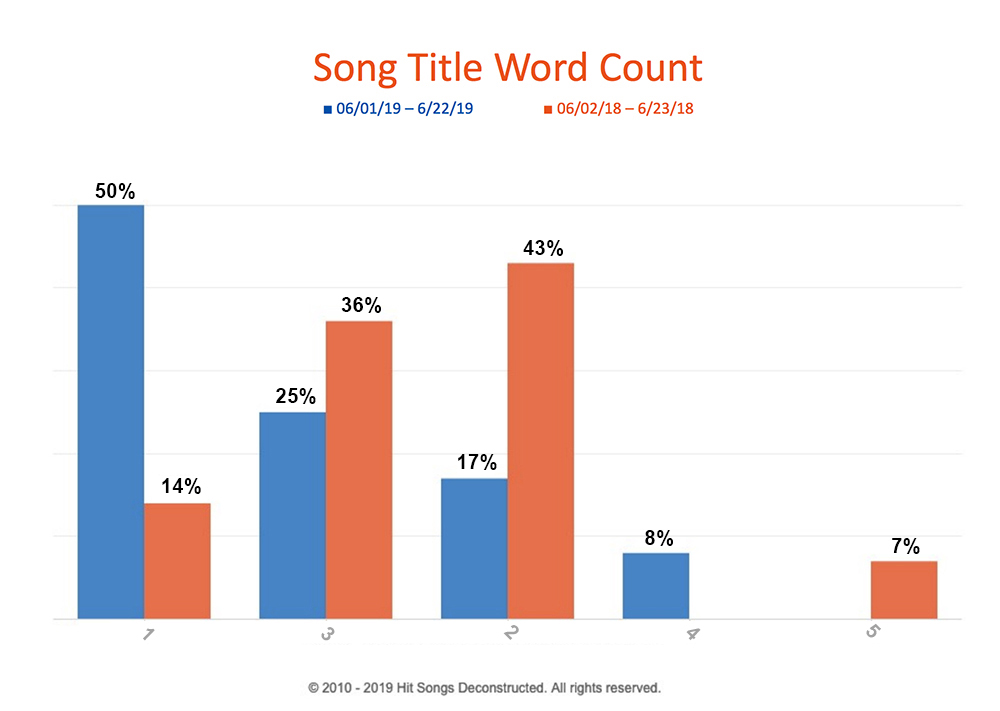 Single-word titles skyrocketed in prominence in 2019 compared to 2018. 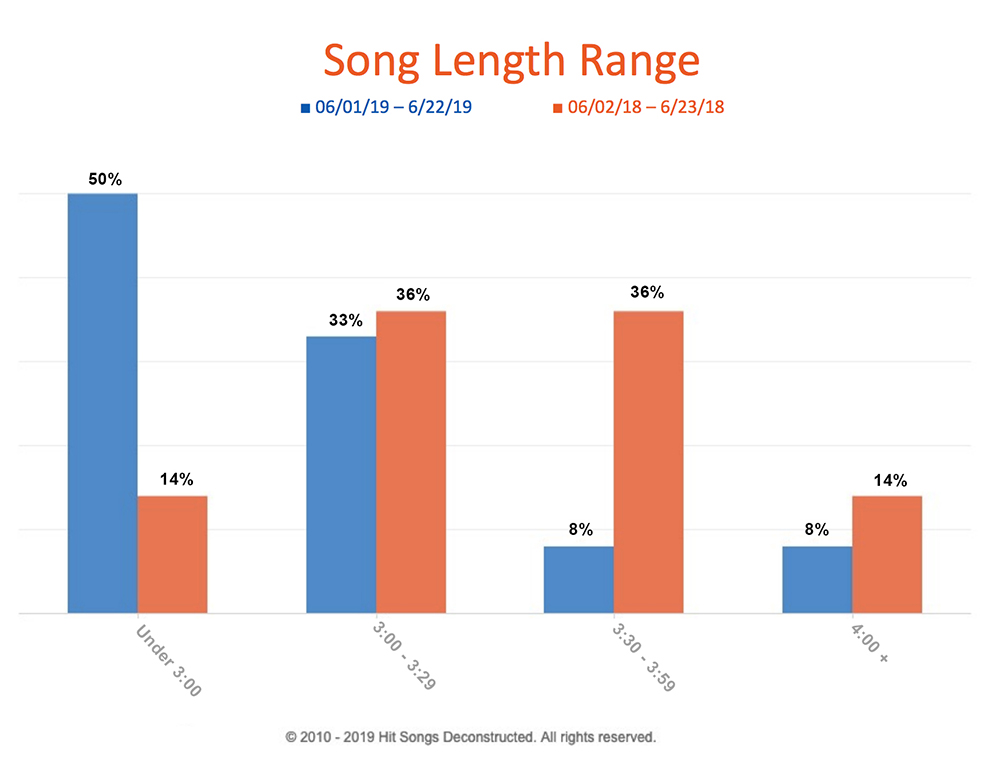