The awardees talked about taking Diddy in as family, going up against the NFL and becoming famous from a Fyre Festival movie. 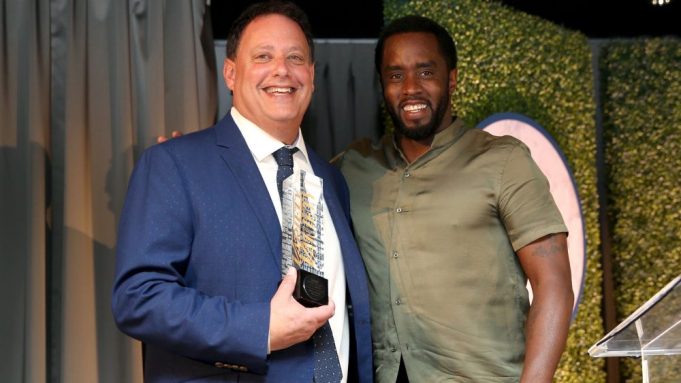 Sean “Diddy” Combs was recalling the moment when he first heard that a collusion action lawsuit was being filed in professional football over owners’ reaction to the knee-taking controversy. “Man, when I heard that Colin Kaepernick and Eric Reid were suing the NFL, I was like, good luck!” said Combs, addressing the audience at Variety‘s Power of Law presented by City National Bank on Wednesday at the Beverly Wilshire Hotel. “I was like, ‘Whatever lawyer took this, they’ve got their hands full.’ And then I look and I’m like, ‘That’s my intern — what?’”

Not just any ex-Bad Boy Records intern, but Ben Meiselas, one of two powerhouse attorneys being awarded at the Variety confab. The other honoree was Kenny Meiselas, Ben’s father, who has represented Combs almost going back to the very origins of his success in music. “He’s got hot, too,” Combs said of the senior Meiselas, pointing out that Kenny represents Usher (who was seated at a front table), Lady Gaga, the Weeknd, Nicki Minaj, Bebe Rexha and “I know I’m forgetting a bunch more people. He basically represents everyone,” Combs said. “But I can say that I’m the special one.”

While there may have been a bit of braggadocio in that claim, Combs made it clear that he does consider himself a member of the Meiselas family in a way that some of the father’s or son’s newer clients probably couldn’t. “I have something I want to confess to Kenny right now,” Combs said in his introductory speech. “I lost my father when I was 2, so whenever I would have some real serious problems that I would have to go to ask my father (about), like being in jail or getting somebody pregnant” — a trickle of laughter emerged among the audience — “or wanting to know what I was gonna go through in my life and my future, I called my lawyer. I called Kenny. And he didn’t notice, but I was calling him ‘big brother’ — but in my head, he was dad.” The hip-hop mogul closed out his remarks by introducing Meiselas as “my adopted pops.”

The younger Meiselas was introduced at the gathering by Reid, the Carolina Panthers player who, along with Kaepernick, took on the NFL and won… or settled, anyway, in what was widely seen as a win not just for the two of them but for all like-minded players who wanted to know that their symbolic gestures would not be curtailed by the league.

“I refused to be one of those people who watches injustices and yet does nothing. I want to be someone my children and children’s children could be proud of,” Reid told the crowd. “When I was being blackballed… around that time, I learned from Colin that he had hired a young, brash attorney by the name of Ben Meiselas who specialized in civil rights cases and fighting for the underdog across the country. … Ben not only represented myself and Colin, but he was there to counsel dozens of other players in the NFL that were reaching out to us for advice, all while the NFL was trying to implement a new policy that would force us to stop our protests.” As a result of the suit and its settlement, Reid said, “We didn’t back down,” and “I still take a knee. … He was there for Colin and I when our own union and our own teammates turned their back on us for fear of repercussions.”

It was a series of victories that could only be celebrated with… some Puff Daddy. “I will always remember after a critical hearing, Ben celebrated by rapping his favorite Diddy song,” Reid said. “I gave a copy of that video to Variety. Bring up the video?” After the clip played on screen inside the Le Grand Trianon Ballroom, the safety added, “This was only an excerpt. We were all excited. It lasted for about 15 minutes. He knew more songs than I did.”

Ben Meiselas, who is a partner at Geragos & Geragos, took the podium and referred to another high-profile case that recently resonated throughout pop culture. “This year we led some of the largest class actions. Particularly, as some of you may know: we brought down the Fyre Festival — a really good cause,” he said as the audience laughed and applauded. “Although I am now constantly asked, ‘Are you the guy who plays the lawyer in the Fyre Festival movie?’ I go, ‘No, that’s actually real life.’”

He segued to a case that inspires a greater gravitas. “My most rewarding case, contrary to popular demand and belief, is not Fyre Festival,” said Ben. “It was representing Colin and Eric. Normally a case where your defendant is a billionaire — a la the show ‘Billions’ — is very difficult. But a case with 32 billionaire owners, and the NFL, and then doing it twice, once for Colin and once for Eric, was a case against all odds, I was told by my critics. Not to mention we had an executive who was tweeting and calling Colin and Eric horrible names,” he added, alluding to the nation’s own CEO, “and my firm was receiving death threats on a weekly and sometimes daily basis. But we persevered.”

Ben Meiselas indicated the counsel sometimes runs the other direction. “Eric and Colin attended every deposition, passed me notes — (and) critiqued my deposition skills,” he said to laughter. At least one of them offered some advice on how to go about being a celebrity, as well, by critiquing his look in the photo shoot seen in the current print issue of Variety. “Yesterday I asked Colin what he thought about the article and he told me, ‘Ben, I love it; you’re doing a great job. But if we’re gonna keep winning together, next time you and I make the cover of Variety, I’m gonna have to teach you how to pose on a rooftop.”

The younger Meiselas spoke of growing up watching his father and Diddy work together. “My earliest memory was as a scrawny 5-year-old following my father everywhere … watching Sean Combs and others compose some of the greatest hits of our times. But more important for me was that I watched my dad. I watched as he composed a legal career based on integrity, on passion, on compassion and hard work, and I took notes.” Later, “Sean Combs gave me an internship which changed my life when I was in high school. For those who don’t know, Bad Boy Records is the Seal Team 6 of internships. It prepared me for everything, being under Puff’s tutelage. Which is why I think when judges yell at me… it’s nothing compared to Puff.” After graduating from Georgetown, he met Mark Geragos, “who I think truthfully liked me because no matter how hard he yelled at me, I was willing to take it, based on everything I had experienced with Puffy.”

He almost got waylaid at Bad Boy. “Imagine Ben, the summer just before his junior year at George Washington,” said Kenny. “He worked himself up from getting bagels to working on the Change or Die voter campaign. I check and Ben doesn’t get on the plane. He doesn’t get back to George Washington. School has started.” He called his client. “Puff’s going, ‘Ben’s kind of doing a good job down here!’” Meanwhile, “Ben says, ‘Dad, I’m hanging with Puff Daddy. I don’t need college!’ I’m like, time to be father knows best. I go, ‘Ben, do you know what Puff’s kid is going to do in a couple of years? He’s going to college. Get back on that plane!’ Fortunately for Colin and Eric and the victims of Bakersfield” — Ben has also worked on some well publicized cases involving law enforcement and civil rights in that California city — “he then got on the plane and went back to school.”

Diddy was still remembered more as good influence than bad, as Ben remembered the Vote or Die voter registration campaign of 2004 as the point “from which I developed a passion to be an agent of change… and to fight for social justice.”

Kenny also lauded Diddy as someone who’s more of a quick study than grudge-bearer. “Puff did me a favor, because he did not mention probably my worst strategic move in the business: I got Puff fired — that’s right, fired — from the Father MC project. Who here knows Father MC?” Meiselas asked, to near-silence. “See? There was this 19-year-old hotshot A&R guy, and he A&R-ed this Father MC record. Father MC was gold heading to platinum, the fans were starting to go crazy over him,and right before his second album, somebody got it in his head, ‘You don’t need that Puff Daddy guy, you’re Father MC! You need to run this project yourself!’ So he hires me. I’m good at what I do. I went in the room, there was screaming and yelling with Andre Harrell, and this Puff Daddy guy gets fired. I didn’t know how important he was.

“Well, Father MC was I guess never really heard from again, and this Puff Daddy guy is doing Jodeci, he’s doing Mary J. Blige, and I go, ‘I think I made a mistake!’ And then Puff, showing his true (colors), comes to me a year later and goes, ‘You know Father MC, and how you got me fired?’ I’m like…” He mimed flinching. “‘He’s gonna hit me!’ But he’s like, ‘I like that. Will you represent me?’ So over two decades later, we’re still together, and as Puff said, it’s as much family as it is representation.”