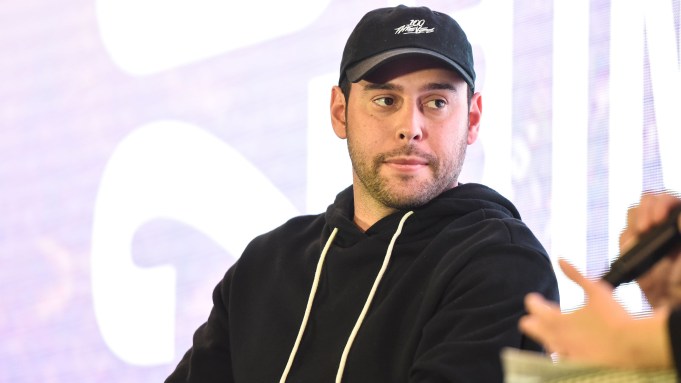 Scooter Braun hasn’t publicly spoken about the battles between Taylor Swift and the Big Machine Label Group in the nearly half-year since his Ithaca Holdings purchased her former record label. He broke his silence Thursday in a Q&A at the 2019 Entertainment Industry Conference, co-sponsored by Variety and the Hollywood Chamber of Commerce, in which he acceded to addressing the inevitable.

That didn’t mean he was going to address the specifics of the mega-squabble or even say Swift’s name out loud. But he did make his message loud and clear: Let’s talk.

Talking about the charitable efforts of SB Projects clients like Justin Bieber, Ariana Grande and Dan + Shay, Braun said, “My grandpa used to say, when your glass keeps getting poured full, you better pour it in other glasses or it makes a mess. And that’s a philosophy I have. And I know she’s gonna ask me soon,” he said, smiling, looking toward moderator Shirley Halperin, the executive editor for music of Variety. “It’s hard, when you’ve tried to live your life that way, when other people are trying to say that you don’t live your life that way… Because you can’t make everyone like you. You can’t get all the facts straight. But I think the only thing you can do is hope for communication… And I know where you’re going to go. I’m kind of getting ahead to it. Ask the question!”

Halperin asked how Braun “wraps his head around” having so many Swift supporters casting him as the villain in the situation, which has culminated — so far — in a very public debate about whether the singer can perform hits from her Big Machine catalog on Sunday night’s American Music Awards.

Braun nodded to a camera he saw filming the conversation and acknowledged a touch of awkwardness, knowing he was about to issue his first public statement on the contretemps. “I haven’t talked about this in six months. Not once. I haven’t made a statement about it,” he said. “When there’s a lot of things being said and a lot of different opinions, yet the principals haven’t had a chance to speak to each other, there’s a lot of confusion. I’m not going to go into details here, because it’s just not my style. I just think we live in a time of toxic division, and of people thinking that social media is the appropriate place to air out on each other and not have conversations. And I don’t like politicians doing it. I don’t like anybody doing it, and if that means that I’ve got to be the bad guy longer, I’ll be the bad guy longer, but I’m not going to participate.” (A rep for Swift did not immediately respond to Variety‘s request for comment.)

Braun alluded to Big Machine’s official statement saying that the company and Swift had effectively been negotiating to negotiate before, by their account, she broke it off with her social media declarations about the AMAs imbroglio last week.

“What I’ll say is, people need to communicate, and when people are able to communicate, I think they work things out,” Braun said. “And I think a lot of times things are miscommunications, because I believe that people are fundamentally good. I think there are a lot of real problems in the world, and I think that these problems that are being discussed can be discussed behind closed doors and figured out pretty easily, and it’s something I’ve wanted to do for six months. And it’s hard, because I can handle it pretty easily, but when it gets to a place where there’s death threats and there’s offices being called and people being threatened…  it’s gotten out of hand. And I think people need to come together and have a conversation, because that’s not what we got in this industry for.

“And the only good thing for me is that when you get knocked down on some stuff, you get to find out who your real friends are real quick. And watching some people in the industry who might smile in your face, and then suddenly you’ve got a little dent in the armor and they come trying to kick it in even more, it doesn’t bother me, but it lets me know where I stand. The truth is, I have no ill will for anybody. And the moment people want to have a conversation with me, I’m ready to have that conversation, and I’m not going to add to the narrative. I disagree with it, but I’m not going to add to the narrative. I just want to fix things and set a better example for people.

“I’ll just say it on a grander scale. I don’t like it watching it in politics. Right now we’re in a scary time where people say things and then people might not be in the right mindset and do really horrible things. And we’re inciting all of this by continuing these arguments in public. We just need to go behind closed doors and see if we can have a conversation. And if we’re not having conversations, then I don’t think we’re going to find resolution.”

Braun seemed to allude — again, without naming names or situations — to Swift’s condemnation of snark that his flagship client Bieber had addressed toward her in the past; the singer subsequently apologized.

At the close of the interview, Halperin asked — with completely ironic intent — “What are you doing this Sunday? Are you going to the AMAs?”

“Thanks, everybody,” Braun said, standing to leave with a laugh as his answer.