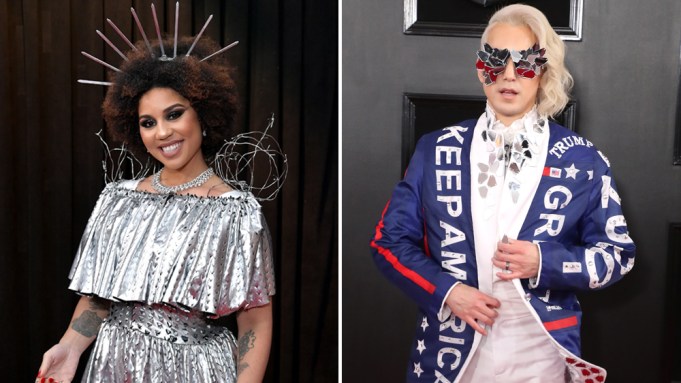 MAGA is having a small fashion moment at the 2019 Grammys. Singers Joy Villa and Ricky Rebel both used the red carpet to spread their pro-Trump messages.

First up is Villa, who dressed as President Trump’s hotly contested border wall. Draped in silver with barbed wire tufts on her shoulders and carrying a “Make America Great Again” bag. “This is what I believe in,” Villa told Variety’s Marc Malkin. “I believe in the President, I just released an album called ‘Home Sweet Home’ and it’s all about my love for America, barbed wire, I’m having fun with it.”

Villa now has a history of wearing conservative couture on the Grammys red carpet. Last year, the singer donned a rainbow-colored anti-abortion dress, and in 2017 she wore a blue “Make America Great Again” gown that featured Donald Trump’s name embellished along the back. In 2015, she again created a stir when she sported a sheer dress of orange netting.

Next on the carpet, Rebel, the glam-rock artist, arrived in a blue jacket emblazoned with the words “Keep America Great” and “Trump 2020” over a white blouse, pants, and high-heeled knee-high boots.

Rebel has been an active supporter of President Donald Trump and faced considerable backlash over it, especially considering the fact that Rebel, who is bisexual, has been an advocate for LGBT rights.

He’s posted photographs of himself outside of Trump Tower, often retweets the President, and defended his support of the POTUS in a 2017 interview with Independent Review Journal. In it, he said he’s pro-Trump because he supports his refugee ban, and said it doesn’t mean he’s against the LGBT community.

“A radical murdered 49 LGBT in cold blood at Pulse Nightclub,” he told the outlet. “That could have been me, my family, and friends there. I voted for the person who wanted to heavily vet refugees. The other candidate wanted a 550 percent increase in Syrian refugees. It only takes one.”

Rebel has toured with the likes of Britney Spears, and was reportedly discovered by Michael Jackson in the late ’90s.