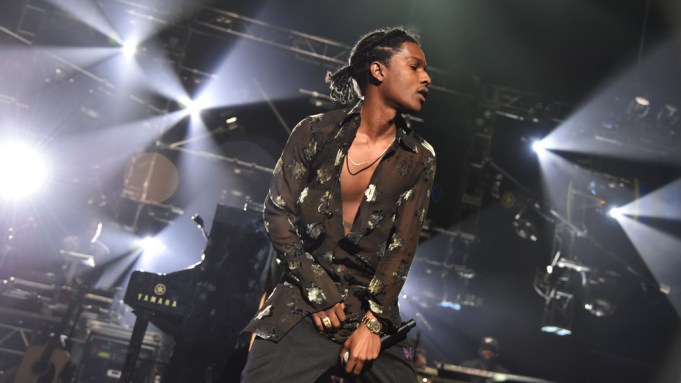 UPDATED: In one of the more surreal moments from a presidency filled with few not-surreal moments, President Trump spoke out today in support of rapper A$AP Rocky, who has been jailed in Sweden for more than two weeks after an altercation with fans he said were harassing him.

“A$AP Rocky is a situation in Sweden, a great country, and friends of mine and the leadership,” the president said in his familiar fractured phrasing, “and we’re going to be talking to them, we’ve already started. Many, many members of the African-American community have called me, friends of mine, and said can you help? I personally don’t know A$AP Rocky but I can tell you he has tremendous support from the African American community in this country. When I say African American, I think I can really say from everybody in this country because we’re all one.”

On Saturday, the president tweeted that he’d spoken about the matter with Swedish Prime Minister Stefan Löfven. “Just had a very good call with @SwedishPM Stefan Löfven who assured me that American citizen A$AP Rocky will be treated fairly,” the president wrote, thoughtfully tagging the prime minister in his tweet. “Likewise, I assured him that A$AP was not a flight risk and offered to personally vouch for his bail, or an alternative.” However, a rep for the prime minister noted to CNN, “”The Prime Minister made sure to point out that the Swedish judicial system, prosecutors and courts, are completely independent. He also pointed out that everyone is equal before the law and that the government neither can nor will try to influence the judicial process.”

Indeed! Trump’s comment was almost unquestionably an attempt to deflect the widespread accusations of racism he has done little to refute since he was elected, and also a response to a plea from Kim Kardashian (who is not African American), who was inspired to reach out to the president by her husband, Kanye West, earlier this week; both have met with the president in recent months.

Despite their and the Trump administration’s efforts, a Swedish judge decided Rocky two associates will be held for another week in pretrial detention to allow police to finish investigating the altercation, which took place June 30 in Stockholm. The judge sided with prosecutors, stating that the rapper is a flight risk.

Kardashian tweeted thanks to the team on Thursday. “Thank you @realDonaldTrump , @SecPompeo, Jared Kushner & everyone involved with the efforts to Free ASAP Rocky & his two friends,” she tweeted. “Your commitment to justice reform is so appreciated.”

Despite their efforts, Rocky has been in jail for more than two weeks without being charged.

A spokesperson for the State Department said earlier this week, “There are certainly some facts about the arrest and detention that raise concerns. We expect all governments, including Sweden, to treat American citizens fairly and with respect. We hope to see A$AP Rocky and his colleagues back on tour and reunited with friends and family soon.”