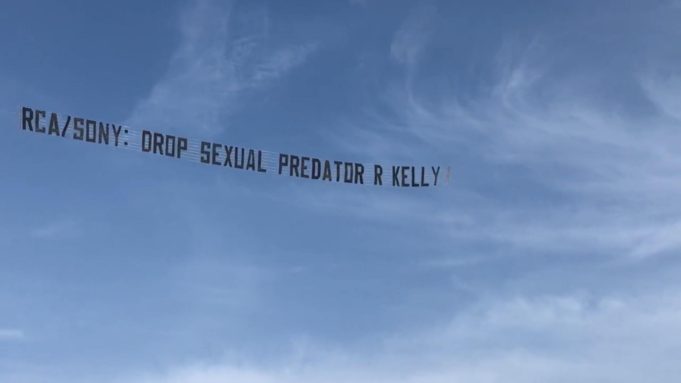 A plane towing a sign that read “RCA/Sony: Drop Sexual Predator R. Kelly” flew over Sony Music’s offices in Culver City, Calif., Friday afternoon. The plane, commissioned by the national women’s organization UltraViolet, was intended to further calls for RCA, which is owned by Sony Music and has been affiliated with Kelly for his entire solo career, to part ways with the singer in the wake of longstanding accusations of sexual misconduct against him, recently detailed in the Lifetime documentary series “Surviving R. Kelly.” In announcing the plane via a statement Thursday, UltraViolet proclaimed solidarity with the #MuteRKelly campaign.

“It is long past time for RCA to dump R Kelly and take a stand against abuse,”said Karin Roland, UltraViolet’s chief campaigns officer. “Their inaction is beyond shameful. RCA can no longer pretend that R. Kelly’s music can be separated from his violent actions. Kelly uses his fame, musical talent, fortune, and standing in the music industry to lure in and abuse young Black girls. Even some of his songs are literally inspired by the abuses he has perpetrated. Kelly has been able to get away with his years of abuse precisely because his victims are young Black girls who face even more barriers to justice than their white peers. Sixty percent of Black women are sexually abused by age 18, but their abuse is written off because of harmful racial stereotypes that paint Black women and girls as more sexually promiscuous and aggressive than young white girls. We must believe and support Black survivors of sexual violence. It is time all of us work alongside the amazing Black women organizers calling out R. Kelly and his enablers to ensure justice.”

Roland also called out Spotify, which attempted unsuccessfully to ban Kelly’s music from its playlists last year. “When record labels like RCA Records and music platforms like Spotify promote abusers, they allow those abusers to reap in profits, lining their pockets with royalties and expanding their fan base. This normalizes violence against women. We are deeply disappointed that in light of the comprehensive allegations of sexual abuse made public by the “Surviving R. Kelly” documentary, that RCA Records and Spotify continue to choose abusers over the survivors of their crimes.”

Sony’s New York offices were the site of protests from Kesha fans in 2016, calling on the label to free her from her contract with the Sony affiliate Kemosabe, run by songwriter/producer Dr. Luke. Kesha has been embroiled in a legal dispute with Luke, alleging that he sexually assaulted her while she was signed to his label; she remains with the label but is not working with Luke.

And in 2002, Michael Jackson led protests in New York and London against the company — to which he was signed at the time — calling its business practices “racist.” While Jackson led the protest from the top of a double-decker bus, fans gathered outside Sony’s New York headquarters. However, some commented at the time that Jackson’s protest may have been more closely related to what he felt was the label’s failure to promote his 2001 album “Invincible” at the level he’d expected.

Other labels have also weathered criticism and protests over the years for all manner of reasons. In 2010, several hundred Lupe Fiasco fans gathered outside of Atlantic Records’ New York office to demand the release of the rapper’s album, “Lasers.” It prompted then Warner Music chief Lyor Cohen to emerge with the rapper and a boom box and play the new music. Further back in 1992, the release of Body Count’s “Cop Killer” brought Time Warner under fire as law enforcement agencies objected to the song’s release.

In “Surviving R. Kelly,” Oronike Odeleye, co-founder of the #MuteRKelly campaign, details how recent protests in seven cities have led to concert cancelations.

Variety recently spoke with a prominent entertainment attorney and several insiders about the process RCA would undergo in parting ways with the singer. A rep for RCA did not immediately respond to Variety’s requests for comment.