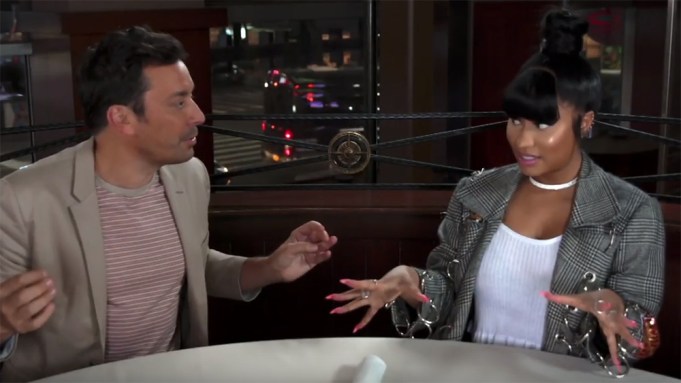 Before becoming a chart-topping superstar rapper, Nicki Minaj worked as a waitress at Red Lobster – and she hadn’t ever set foot back in the establishment until returning for a date with Jimmy Fallon.

In a segment that aired on “The Tonight Show Starring Jimmy Fallon” Thursday night, Fallon and the “Megatron” singer dined at the Times Square location of the chain restaurant, where Minaj admitted that she’d been fired from a few Red Lobsters in the past before pursuing her musical career.

“I have worked at a couple of Red Lobsters and I’ve gotten fired from all three or four of them,” Minaj told Fallon before noting one particularly dramatic firing. “I walked up to this lady. Her and her boyfriend had walked out of the restaurant and they took my pen and they didn’t tip me,” Minaj recalled. “[So] I walked to the car, I banged on the car window and said, ‘Give me my pen!’ I started [flipping them off], and my manager fired me on the spot.”

After dining together, the two changed into their uniforms to wait on unsuspecting customers. While the pop star pulled out her Red Lobster knowledge and customer service chops after their outfit change, Fallon revealed that it was actually his first time in the Florida-based food chain.

Taking her cue, Minaj offered her expertise on the menu and ordered for the table based on her personal favorites. What came next was a feast for far more than just two, with Cheddar Bay biscuits, extra-large frozen Sauza Gold tequila margaritas, whole lobsters, crab legs, Cajun chicken pasta, fried calamari, steak and more rich delicacies covering the large table between them.

After they attempted to eat their way through all the food, including Minaj attempting to break down a lobster to no avail, Fallon gifted the singer with a black card on behalf of Red Lobster, giving her free Cheddar Bay biscuits for life.

“Oh my god, this is the nicest thing anyone’s ever given me,” Minaj said.  “Thank you.”

Minaj was on the show to promote her new single “Megatron,” which dropped last Friday and reached No. 1 on the iTunes charts.