The pop-punk band also covers "Let It Go" from "Frozen" and "Power of Love" from "Back to the Future" on new collection “From the Screen to Your Stereo 3." 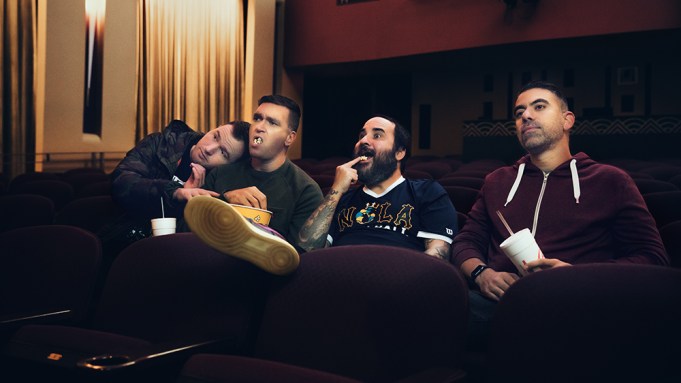 Remember the plot of “Be Kind, Rewind”? Mos Def plays a video store clerk who, after its inventory of videocassettes is erased, sets out with Jack Black to reshoot movies such as “Ghostbusters” and “Rush Hour 2” in the streets of Passaic, N.J.

That idea — minus the wacky Fats Waller subplot — resonated with the members of pop-punk band New Found Glory, and played a key role in the creation of their third collection of covers of songs from films, “From the Screen to Your Stereo 3,” which Hopeless Records will release on May 3.

They asked the label to finance videos for the album’s seven tracks and a prompt greenlight sent them into the DIY world of filmmaking, recreating scenes from “Rocky III,” “Back to the Future” and “The Greatest Showman.”

“We wrote all the videos ourselves, mapped out all the shots, all the scenes, all the concepts,” says guitarist Chad Gilbert. “Got on Amazon and found all the costumes. We found locations, some we rented and others where we just shot, and did seven videos.”

The first one released was for Huey Lewis & the News’ “The Power of Love”; “This is Me,” featuring lead singer Jordan Pundik as P.T. Barnum and Gilbert as himself and a clown, premieres here (watch above). More than any of the other covers, Gilbert sees “This is Me” as the one tune most in line with NFG’s originals. After giving it some thought, Pundik agreed.

“Talking about how you’re not good enough and nobody wants you,” he says. “Thinking about it now, that’s in our own songs.”

Back in 1999, when New Found Glory was leading a new generation of modern rock bands, they had developed a following along the East Coast that led to signing with Drive Thru Records. As a way to introduce the group, they recorded a collection of covers of movie songs, among them “That Thing You Do,” “My Heart Will Go On” and “I Don’t Want to Miss a Thing,” done in a melodically catchy yet abrasive style.

It gave them a shot at cutting through the guitar-driven din that filled the side stage they were playing on the Warped Tour after the collection’s release. They were still handing out their own flyers to pull in an audience when, at the stop in Minneapolis, Pundik felt the reach of their covers.

“A few people were like, ‘Oh, I downloaded your covers on Napster.’ Napster really helped us. With the streaming thing and YouTube, now younger fans might hear these covers and then go, ‘oh I want to hear their albums.’ People will search ‘Power of Love’ and see our cover. It’s pretty funny how it’s come full circle.”

The first “Screen to Stereo” sequel was released in 2007, back when YouTube was in its infancy and Spotify was just a concept. Ten years later, while on tour supporting their ninth studio album of originals, “Makes Me Sick,” longtime fans began requesting another edition. Starting with ‘Power of Love,” the only cover in the new collection they have played live, they hatched a plan.

“In part two, sort of like most trilogies, we lost a little bit of direction creatively,” Gilbert adds. “We went back to what we did in the first one when no one knew our music. Celine Dion’s “My Heart will Go On’ was everywhere so we said, ‘Let’s do a punk rock version of it’. We started doing more — Aerosmith’s ‘Armageddon’ song was next — so when it came to do part three, the focus was on the anthems. What’s the ‘Titanic’ and the ‘Robin Hood’ theme of today? What are the songs you can’t escape in 2018, 2019? ‘This is Me’ was one of them.”

As they recorded, they looked to friends for their reactions. Among the songs auditioned were “Cups” from “Pitch Perfect,” “Let It Go” from “Frozen” and “Accidentally In Love” from “Shrek 2.”

Says Gilbert: “What’s really cool about ‘This is Me’ is that our friends loved the song. Older punk rock fans don’t know ‘The Greatest Showman,’ haven’t seen the movie. And they hear that song and they’re like, ‘This just sounds like an awesome New Found Glory song. This is a really good song.’ Maybe ‘Let it Go’ and ‘Eye of the Tiger’ are more goofy and fun. ‘This is Me’ is not a gimmick to them.”

Editor’s note: A previous version of this story mistakenly noted that Jordan Pundik plays Lettie Lutz in the video.