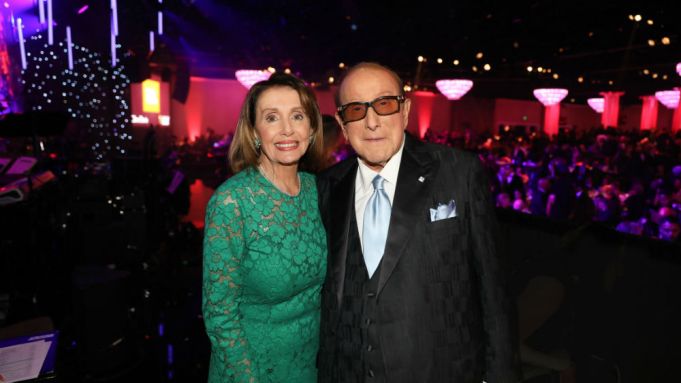 Nancy Pelosi, one of the night’s many notable guests at Clive Davis’ pre-Grammy celebration on Saturday, got a standing ovation from Hollywood elites as she was introduced by Davis at the start of the annual gala.

“The first introduction tonight is of someone who has joined us many times before but somehow I know and all of you out there know this year is different,” Davis remarked.

“She’s front and center making history as never before,” he continued. “She’s now the highest ranking female politician ever. Ever. Ever. In the United States. Need I say more? Ladies and gentlemen, join me in giving the warmest welcome to the Speaker of the House Nancy Pelosi.”

Pelosi, who had just attended Trump’s State of the Union earlier in the week, did not give any remarks but stood from her seat and waved to the crowd.
Seated at Pelosi’s table were Barbra Streisand, Apple CEO Tim Cook, Calvin Klein and Justin Bieber’s manager Scooter Braun.

Davis spoke to the Variety earlier this week about Pelosi’s appearance.

“She called me to say ‘I’m coming back, this is one night of the year I would never miss.'”