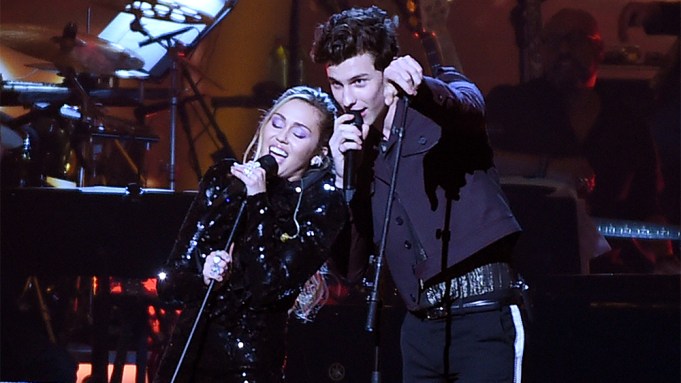 Cyrus told Variety‘s Marc Malkin that she reached out to Shawn Mendes to set up the collab via Instagram DMs.

“I actually sent him a DM and said I don’t know what you’re trying to do next because I’ve actually been in his position in his career too before where you’re someone who I think is trying to fit into pop music and you want to be played on pop music but you don’t want to be conformist and you want to do your own thing,” Cyrus said. “I love the way that he always kind of plays alternative pop because it’s something that I love to do.”

The pair was accompanied by Mark Ronson for the 1983 duet that featured Kenny Rogers.

Cyrus set off a whirlwind of speculation that they were working together when she posted pics of herself on Instagram during Grammy rehearsals. Fans noticed Mendes’ guitar and other equipment marked with his name in the background.

Another photo showed the two arm-in-arm with Mendes wearing a jacket emblazoned with Parton’s face on the back along with a caption reading, “this could be the year for the real thing,” which happens to be a lyric from “Islands in the Stream.” She captioned a photo of them on the red carpet at MusiCares with yet another lyric: “We rely on each other uh-huh.”

Cyrus and Mendes are set to perform together at the Grammys Sunday.