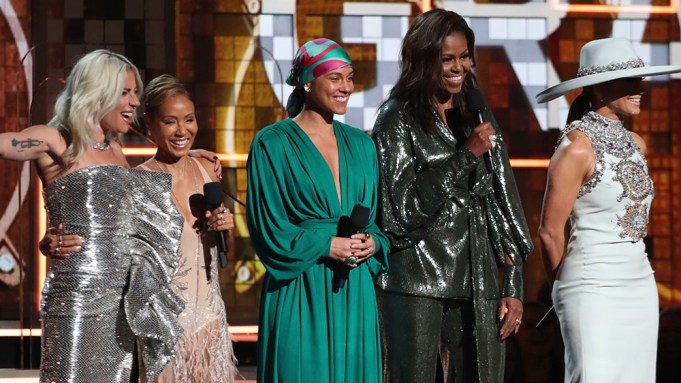 Michelle Obama took a break from her book tour for a quick stop at the 61st annual Grammy Awards.

Brought on stage by this year’s host, Alicia Keys, the former First Wife took the opportunity to introduce the show alongside some of the evening’s biggest stars including Lady Gaga, J. Lo and Jada Pinkett Smith.

However, before Obama even began speaking, deafening cheers and a standing ovation shook the Staples Center, forcing her to wait on her speech.

“Alright, alright, we got a show to do,” she said in an effort to quiet down the crowd, but the cheers just kept on coming. Several minutes later, after some cheerful pointing and some more crowd-quieting efforts, Obama began her speech, a touching reflection on her childhood love of Mo-Town and the importance of music in bringing people together.

“From the Mo-Town records I wore out on the south side, to the who run the world song that fueled me through this last decade. Music has always helped me tell that story,” Obama said. “Whether we like country, rap or rock. Music helps us share ourselves. Our dignity our and sorrows, our hopes and joys. It allows us to hear one another, to invite each other in. Music shows us that all of it matters every story with every voice every note with every song. Is that right ladies?

Gaga also jumped in with her own thoughts about the power of music saying, “They said I was ‘Weird,’ that my look, my choices, my sound, that it wouldn’t work. But music told me not to listen to them. Music took my ears, took my hands, my voice and my soul and it led me to all of you and to my little monsters who I love so much.”

Lopez shared a similar sentiment saying, “Back in the bronx music gave me a reason to dance, from hip-hop to free style pop, soul and salsa, and it kept me moving from the block to the big stages and even bigger screens. It reminded me where I come from, but it also reminded me of all the places that I can go. Music has always been the one place we can all feel truly free.”

Pinkett-Smith added, “We express our pain, power, and progress through music, whether we’re creating it or just appreciating it. But here’s what I know: every voice we hear deserves to be honored and respected.”