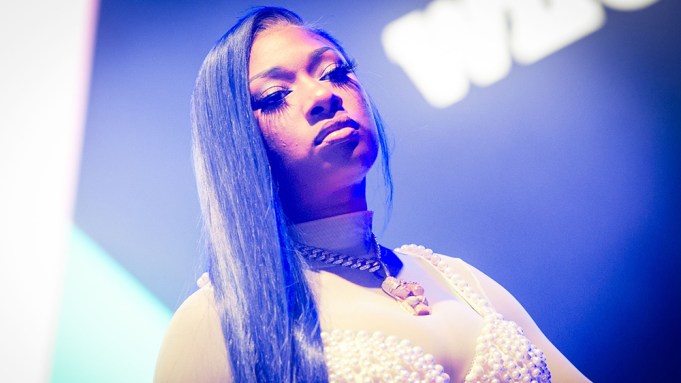 It’s already August, but according to Megan Thee Stallion, “hot girl summer” — the social media-fueled movement that’s been hashtagged so much, even fast food chains have jumped in — is far from over.

“We’ve extended the summer, honestly. We’re gonna drive it until October. Don’t even trip,” the rapper and self-designated “hot girl coach” told Variety at Beautycon in Los Angeles over the weekend.

And now, the season finally has its own anthem. After some teasing via Twitter in July, Megan Thee Stallion dropped the single “Hot Girl Summer” (featuring Nicki Minaj and Ty Dolla $ign), on Aug. 9. The track is produced by Juicy J, and the first single since the release of her “Fever” mixtape in May. It shot up to No. 1 on the iTunes USA chart within a few hours.

The Houston rapper said she wrote the track on an early morning last month, while she was in Mexico with the retail brand and members-only social club Revolve. She then got in touch via social media with Nicki Minaj, who recorded verses overnight and sent them to Megan Thee Stallion the next day. The two hadn’t met in-person before collaborating.

“I hadn’t even spoken to her before. So, it was just so natural. She was amazing. She was so sweet,” the 24-year-old said with a laugh. “I couldn’t even believe she did it that fast.”

The result is a clever, femme-fueled end-of-summer bop rounded out with Ty Dolla $ign’s honey-voiced hook.

Summer 2019 could easily be re-named the Summer of Megan: In addition to going viral with the #hotgirlsummer meme and reaching the top spot on iTunes, she’s the digital cover star of Paper Magazine, on which the “Cash S—” rapper is styled to look like Todokori from the popular manga series “My Hero Academia.” A video posted last week of her dancing while rapper/singer Lizzo plays Too $hort’s “Shake That Monkey” on the flute has been viewed over 2 million times (Megan Thee Stallion teased an upcoming collaboration with Lizzo at Beautycon to “Entertainment Tonight”).

But still not sure what #hotgirlsummer actually is?

And you have to support other women. In June, the rapper hosted a beauty pageant in Los Angeles that awarded the winner money for college tuition. She said the biggest misconception about women in hip-hop is that they don’t like one another, but any perceived negativity is based mostly on speculation and internet rumors rather than real-life interactions.

She added while women can be “naturally catty,” she likes to support her fellow female rappers.

“I like to make everybody feel included. I want them to know, like, ‘Hey, girl, we could coexist. I’m not a bitch. Let’s hang out,’” said Megan Thee Stallion. “Let’s do some cool sh–. Let’s have fun.”