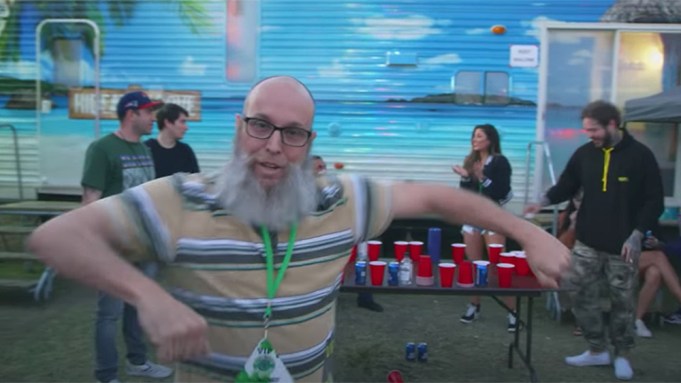 Mike Alancourt is here to dance his heart out, one Post Malone video at a time. The Florida native recently went viral thanks in no small part to his impressive moves. At 43 years old, he appears in the video for Post’s “Wow,” carrying the final third with his bearded, bellied routine.

The video caught the attention of people around the world, including Will Smith who shared the clip on his own social media handle. With millions of YouTube views and counting, Alancourt landed an appearance on “Ellen“ (neighbors back home in Jacksonville gathered to watch and cheer together) and even Post tuned in. The artist then invited Alancourt to bust some moves onstage at a concert in Arizona. Variety chatted with Alancourt about his dance background and how he’s handling internet fame.

How did you get into dance and choreography?
Between the ages of 15 to 25, I competed heavily in Color Guard (Drum and Bugle Corps). While the emphasis was mainly on manipulating the equipment (rifles and flags), I also received some technical dance training through that. In August of last year, as part of a commitment to self care, I decided to start trying things I had always said I wanted to do one day — a hip-hop dance class being one of those. I had seen a friend posting about 1Vibe dance classes on Instagram and decided to check it out.

Huge shoutout to #jencolvinchoreo and #1vibedance The love is palpable!

Bring us back to that day at Vibe studio.
I had only been to 1Vibe twice before, but when Jen Colvin, 1Vibe’s owner and choreographer, announced that week’s song would be “Wow” by Post Malone, I immediately knew I wanted to go.

Jen offers the class twice a week. I learned the routine Tuesday night and posted a rough cell phone video of myself at the end of class. Jen saw the video and encouraged me to come back on Thursday night to participate in the studio’s video.

At the end of every class, Jen opens the floor to anyone who’d like to make a video. As usual, Jen recorded a lot of different groups which she normally splices together into one cohesive video. Imagine my surprise when she posted the unedited recording of just my group doing the entire routine.

Did you think it would go viral?
God, no. I never imagined this would happen.

How does it feel to have Post Malone call you a legend?
Surreal. The whole experience has been surreal.

What was the best part of shooting the music video?
Hanging out with the crew. They were so down to earth and made me feel incredibly welcome.

Was it intimidating performing in Arizona in front of thousands?
Yes. I almost didn’t get on stage. However, his crew assured me there was no pressure. I remember thinking that this was a once-in-a-lifetime opportunity that I couldn’t pass up, so I decided to go for it.

What was the best moment for you on “The Ellen Show?”
I got to take my best friend Michelle who happens to work in PR, and share that experience with her.

Your Instagram followers are growing every day and now number over 102,000. How do you feel about gaining fame on social media in this age?
It’s confusing. I vividly remember a world without the internet, so I’m not even sure what it means to be “social media famous.” I’m still figuring it out.

You’re 43 years old. How do you have such stamina? What are some lifestyle tips to stay fit?
[Laughs] What you don’t see is me collapsing the minute the dance routine is done. Seriously though, 1Vibe’s atmosphere is so welcoming and encouraging, you can feed off of the energy in the room. It’s a no-judgement zone. In general, I try to not take myself too seriously and do things I enjoy.