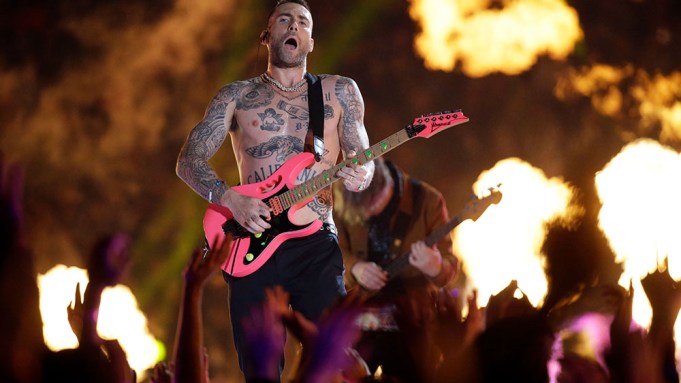 Maroon 5 singer Adam Levine dedicated the band’s Super Bowl halftime performance to “Jordy,” his late manager Jordan Feldstein. Feldstein, the older brother of actor Jonah Hill, died in December 2017 at the age of 40 of a blood clot in his leg, among other contributing factors. Among his many successes as the band’s and Levine’s representative, Feldstein negotiated Levine’s coach role on NBC’s “The Voice.”

With the 14-minute long performance, months of will-they-or-won’t-they speculation was put to rest once performers Maroon 5, along with guests Travis Scott and Big Boi took the field. The band’s participation in the show had come under fire in recent weeks because performing during the game — which is the biggest global stage for a musician, with an estimated 100 million viewers — is effectively an endorsement of the National Football League’s treatment of former San Francisco 49ers quarterback Colin Kaepernick. The league’s stance toward the athlete, who has not played professionally since his controversial stance to “take a knee” during the National Anthem before games, has polarized audiences and significantly complicated this year’s halftime performance, among many other issues. Speaking to Entertainment Tonight last week, Maroon 5 frontman Adam Levine said the band “expected” the backlash.

To counter criticism, Scott announced that in partnership with the NFL, he will make a $500,000 donation to the non-profit organization Dream Corps, among “other initiatives that he will work with the League on.” Maroon 5 also pledged the same amount to Big Brothers Big Sisters of America.

Songs performed during the halftime show included “Harder to Breathe” and “This Love” which was followed by a nod to Spongebob Squarepants and Travis Scott performing his hit “Sicko Mode.” Maroon 5 returned with “Girls Like You” backed up by a gospel choir and drumline. “Show your love,” said Levine just before kicking into “She Will Be Loved” balloons in the crowd were decorated with one-word mantras like “Inhale,” “Smile” and “Feel,” while in the background, the word “Love” was spelled out in lights up above the stadium. “Sugar” and “Moves Like Jagger” followed along with Big Boi, who performed his hit “The Way You Move.”

As the hours to Super Bowl LIII ticked down, some celebs went public by using the  #ImWithKap hashtag. Ava DuVernay tweeted that she will “not be a spectator, viewer or supporter of the #SuperBowl today in protest of the NFL’s racist treatment of @Kaepernick7 and its ongoing disregard for the health + well-being of all its players. To watch the game is the compromise my beliefs. It’s not worth it. #ImWithKap.”