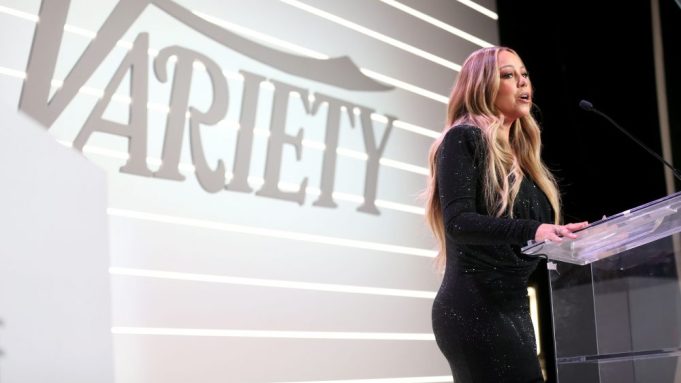 Mariah Carey did some playful creative math during her speech at Variety’s Power of Women luncheon presented by Lifetime on Friday, as she recounted her devotion to the charity that was being honored as part of the event, Camp Mariah. “I started this camp 25 years ago,” she said, “and if you don’t see what an accomplishment that is for a 2-year-old child…” She was already past the laughter and into her next, more serious thought when she added, “I’ve been blessed. I mean, it’s true!”

Carey got real with the arithmetic when she recounted the sexism and control issues she faced in her younger years as a superstar forced, for a time, to be malleable.

“I was 18 years old when I got my first record deal,” she pointed out. “A lot of very powerful men controlled my career — what I wore, who I worked with, and every aspect of my overall image. Believe me, that can be very intimidating and confining to a young girl just getting started, trying to express herself artistically. It took a lot of hard work, inner strength and believing in myself, but slowly I gained the courage to emerge from that stifling control by a group of men. We love men, but you know, they could never understand or embrace the essence of who I truly am.”

Now, Carey said, “as a mother of two, a boy and girl, I realize my daughter’s going to have a different set of struggles than my son, and I’m doing my best to prepare her for that. So on behalf of her … I want to thank each woman in this room,” she said — looking to fellow honorees Chaka Khan, Jennifer Aniston, Awkwafina, Brie Larson and Dana Walden — “and all the women who have come forward with their truths, their harrowing experiences, and above all their triumphs over the misogynistic society of corporate asses that we deal with every day.”

Carey said at the outset that she wanted to focus not just on the “15,000 wayward children for the past 25 summers” who’ve benefitted from attending Camp Mariah, but “the children in the room — every little girl living inside each of the amazing women here.”

She gave the “Justice for ‘Butterfly'” campaign some extra wings by reciting lyrics from “Close My Eyes,” a key song from that 1997 album. “Shortly after it was released, I received a letter from a fan, a young girl in Germany, who shared that she had been abused by her stepfather, and how ‘Close My Eyes’ had helped her get through the trauma. Her letter touched me, because I wrote that song from a very real place. I wrote it and many other songs to work through my own trauma. I wrote that song for all the children who saw things they shouldn’t see, who are forced to grow up too soon.

“When I was a little girl, I would go on walks alone and come up with melodies and words and sing to myself,” Carey told the audience at the Beverly Wilshire Hotel. “Writing songs and singing were my escape. It was my release. It was how I survived, and it still is. My mother was a gifted opera singer who was also a bit bohemian, if you will. She sent me to a publicly funded sleepaway camp, because we didn’t have any money, and it was a total nightmare. I would elaborate more, but we’ll all be here till dinner. Needless to say, it didn’t work out.

“Then when I was about 10 years old, my divorced parents scraped enough money together to send me to a performing arts camp, and my life changed. Camp was a reprieve from the unsafe and unpredictable environment that I was living in. It was a solid ground beneath my feet — fresh air to breathe, blue sky above my head, but most importantly it was an opportunity for me to invest time and training into my dream to be a singer and songwriter, a vision I’ve held since I was 4 years old. Being around other kids who shared my passion for music and having professionals who nurtured us and saw us as serious artists gave me the support I needed to pursue my career full-on at an early age. Going to camp was an incredible learning experience. I performed in a production and even got a leading role as Hodel in ‘Fiddler on the Roof’! I was thriving — until the racist choir director saw my black father, and then I never got a leading role at that camp again. But that’s another luncheon,” she added with a nervous laugh. “That’s a whole ‘nother luncheon.

“It’s been said it’s hard to be what you can’t see. Camp Mariah is a career awareness camp, giving kids the opportunity to see what they can be, and it provides direct access to people doing all kinds of wonderful things with their lives. People across all industries and backgrounds share their journeys and stories of success with inner-city kids who come from impoverished backgrounds. This camp empowers these children with the knowledge that all things are possible. You don’t have to be defined or confined by your environment, by your family circumstances, and certainly not by your race or gender.”

Commending her fellow honorees — Carey couldn’t help but address Khan as “the legendary, incredible Chaka-Chaka-Chaka-Chaka Khan” — and the other powerful women in the audience, Carey again brought up the next generation: “Now, my daughter will never have …” Carey paused. “She’ll have some barriers, but they’ll be fewer barriers to break through in order to achieve her full potential. You guys are all a beacon of hope, and I stand here with you in sisterhood knowing we’ll continue supporting each other and keep fighting in tandem for equality for us all.”