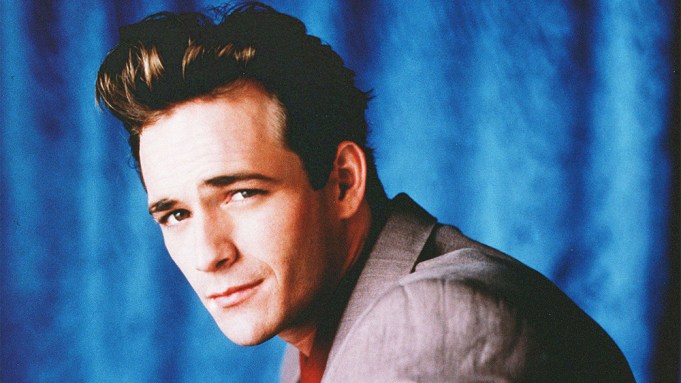 Five years before Luke Perry joined the class of “90210,” the young actor had another school-themed role: he was a jean-jacket clad, MTV-shirt wearing extra in the video for Twisted Sister’s 1985 single “Be Chrool to Your Scuel.” The song was from 1985’s “Come Out and Play” album, the less-successful followup to the 1984 album “Stay Hungry,” featuring the breakout hits “We’re Not Gonna Take It” and “I Wanna Rock.”

MTV refused to air the “Be Chrool to Your Scuel” video, objecting to scenes of zombie violence, despite playing Michael Jackson’s “Thriller” video. However, singer Dee Snider believes the ban was due to his outspokenness against the lobbying group Parents Music Resource Center.

In the clip, an unknown Perry — who morphs into a zombie along with the other “student” extras — interacted with ‘80s star power:  Alice Cooper sings and acts with Snider, while cast as the teacher was Bobcat Goldthwait, who Perry bumps into as the bell rings and students exit the classroom. In Snider’s 2012 book, “Shut Up and Give Me the Mic,” he writes, “years later, when watching the video with  my kids, I would spot a then unknown Luke Perry (normal and zombie-fied) in the classroom.”

According to published stories, Perry, born in Mansfield Ohio, but then based in New York, got the Twisted Sister gig because an open casting call failed, and director Marty Callner was forced to hire extras, one of whom was the future Dylan McKay. Following his metal cameo, Perry landed roles in the daytime soap operas “Loving” (1987–88) and “Another World” (1988–89) before “Beverly Hills 90201” made him a star in 1990.