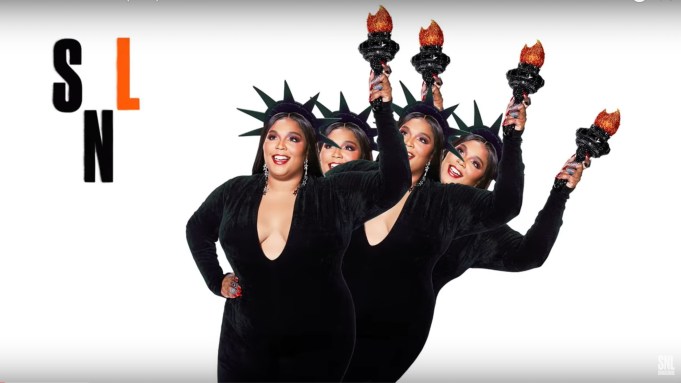 “Saturday Night Live” closed out 2019 with a bang, with a blockbuster episode that featured Eddie Murphy’s first return to the show in 35 years and a stellar musical performance from Lizzo — who also happens to be the most-nominated artist for the 2020 Grammy Awards, with a whopping eight nods for her album “’Cuz I Love You” and the singles from it.

Lizzo nailed two hits from the album. For the smash “Truth Hurts,” the singer was accompanied by a live band, which she hasn’t done on recent tours in support of the album (instead featuring dancers and a DJ). The all-female band brought a whole other dimension to her performance and we certainly hope we see more of in the coming months.

For the closer, “Good as Hell,” the band took a seat but Lizzo and the dancers laid down a holiday performance, complete with Christmas trees, fake snow and even candy-cane-themed stripper poles for two of the dancers.

Earlier this month, Variety caught up with Lizzo at iHeartRadio’s “Jingle Ball” in Los Angeles, where she spoke about her excitement at being nominated for eight Grammys.“Oh my god, it feels great,” she said. “I’m just so happy to be part of this year, it’s been a great year for music so I’m just honored to be a part of the conversation. We’re going to have so much fun at the ceremony because I always wanted to go.”

She also had this unforgettable exchange with Variety’s Ramin Setoodeh after her performance in New York during Pride Week:

What does it feel like to be Lizzo right now?
Pffft! There’s a thong rammed into my ass right now, so deep that it’s brushing up against my bone. If I cough, the tip of my ass, my anus, brushes against the thong. It’s happening right now.

Is that a metaphor for something?
No. It feels pretty good.