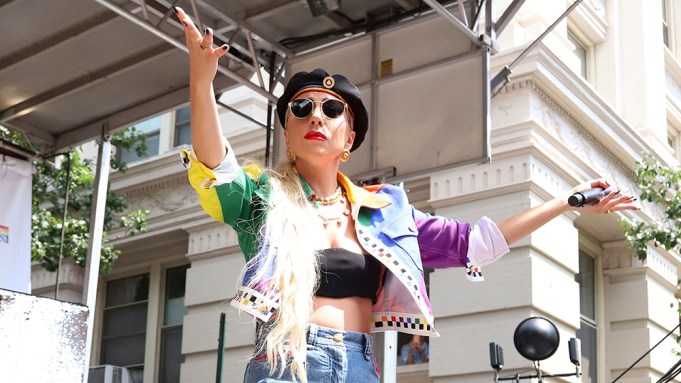 Lady Gaga made a surprise appearance Friday at Pride Live’s Stonewall Day Concert, an event commemorating the 50th anniversary of the Stonewall uprising.

The event is part of a weekend of Pride events, culminating with Sunday’s march.

Gaga, a vocal supporter of LGBTQ rights, delivered an impassioned speech to the New York crowd. “Look around you. Look at what you have done,” the “Born This Way” singer said. “You are the definition of courage, do you know that?”

“This is my mothership. And you, you are my leaders. And I will follow you,” she addressed the crowd.

“I surrender to all hatred. Cause you know what? I will kill it with kindness. True love. True, true love is when you take a bullet for someone. And I would take a bullet for you any day of the week,” Gaga continued.

The pop star called out attacks on the transgender community at the close of her speech.

“It is said that those who threw the first brick on that historic night were members of the trans community. And while we have made tremendous progress, we find ourselves at a time where attacks on the trans community are on an increasing rise each day. I will not tolerate this,” she said.

Gaga joined other speakers and performers at the event such as Chelsea Clinton, Donatella Versace, Whoopi Goldberg, Valerie Jarrett and Alicia Keys.