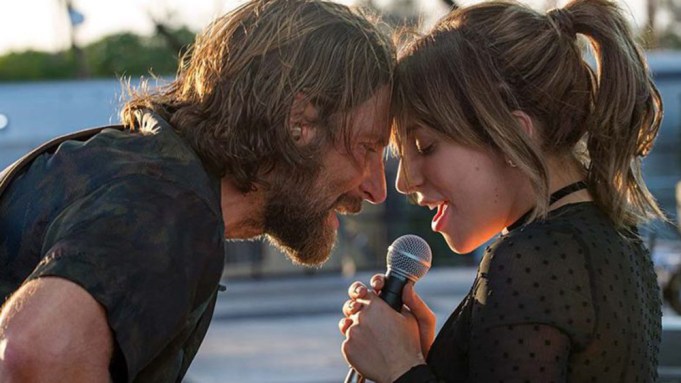 The crowd at Las Vegas’ Park Theater was treated to a surprise appearance during Saturday night’s Lady Gaga show: “A Star Is Born” director and costar Bradley Cooper, who joined the singer for a finale performance of the song “Shallow.”

The song, which was nominated for an Academy Award earlier this week, is the closing number of the “Enigma” show, the residency that kicked off in late December. Attendees had no idea a duet was in store when the actor appeared on stage. The two embraced and he followed Gaga to the piano. “I even got you in-ears,” she told Cooper of the monitors used during live stage performances. “I can’t hear anything,” he cracked. Following the performance, as each of Gaga’s dancers took a bow and introduced themselves, Cooper shyly joined in and said, “Bradley, thank you,” then pitched his baseball cap into the crowd.

Gaga’s show has become a headline-grabber before — just last week, the singer slammed President Trump midway through her 2016 hit “Million Reasons” for the continued government shutdown. During Saturday’s performance, she took another dig at the president as a prelude to her cover of David Bowie’s “I’m Afraid of Americans.”

“Shallow” is slated to be performed at the Oscars in February, Variety recently reported, along with “All the Stars,” the Kendrick-Lamar and Sza song from “Black Panther.”

Watch the performance above and below.