Conway came to Fox News prepared to fight back against Swift's VMAs Trump jab — by ruining one of her songs for all time. 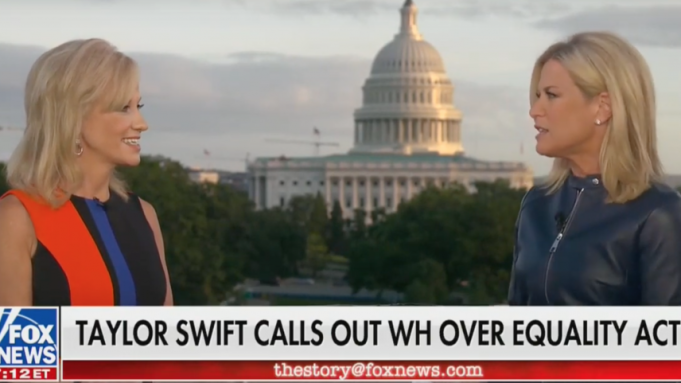 Remarkably, Taylor Swift’s poke at the president on the MTV Video Music Awards show for his lack of support for LGBTQ rights legislation hasn’t yet resulted in a Trump twitterstorm. But Kellyanne Conway went on Fox News Tuesday night to defend the administration’s position against the Equality Act … and to give Swift a sick burn in return by attempting to render one of her songs toxic.

“I actually like the new Taylor Swift song,” Conway told Fox’s Martha MacCallum. “It’s called ‘You Need to Calm Down.’ I can sing it for you.” Rather than do what any reasonable host would, which is tackle the presidential advisor as if to thwart the impact of a live grenade, MacCallum laughed and allowed Conway to break out in song. “If you say it on the street, that’s a knockout / If you put it in a tweet, that’s a cop-out,” she sang, facing the camera. “I love that! I mean, that basically is Washington in a nutshell.”

But Conway came not to praise Swift but to bury her as a typical out-of-touch liberal elitist. “I think when Hollywood and singers and all go political,” she said, “it sounds in the moment like it’s very popular, and you’ve seen so many times where it backfires and it blows up. But she’s also somebody who went up against President Trump head to head in the United States Senate race in Tennessee and lost handily. Marsha Blackburn is our United States senator now,” Conway pointed out, suggesting that Swift’s statement last fall that her home state needed to elect a pro-LGBTQ senator actually helped the anti-Equality Act Republican candidate win.

Taking pains to patronize Swift’s fan base, Conway also argued that the singer’s followers have little idea what she’s advocating. “I would love to ask her audience if they even know what that is, (what) the Equality Act is and isn’t. She’s welcome to her opinion. I can tell you there’s a lot of poison pills in it.”

When MacCallum asked for examples of what poison pills lie within the Equality Act, Conway kicked the subject back to the economy. “The president and the White House support equality,” she claimed, “We don’t support pieces of legislation that have poison pills in it that can harm other people. Look at this economy — it’s equally open to everyone. People have job mobility, the deregulation, what he’s trying to do, peace and prosperity around the world — that’s to benefit everyone. But when something is named something, it’s not always truly that.”

The segment was in response to Swift’s acceptance speech for video of the year at Monday’s VMAs, an award that went to “You Need to Calm Down,” which the singer tied to her support for the Equality Act — a bill that has passed in the House but has yet to be taken up in the Republican-controlled Senate.

Swift’s petition urging the Senate to take up the legislation “now has half a million signatures,” the singer said, “which is five times the amount that it would need to warrant a response from the White House.” She then looked at her watch and tapped it.

But Conway seemed eager to draft Swift and her Hollywood friends into politics after all. “By the way, if you can give a shout-out to the USMCA…,” she said, referring to the United States-Mexico-Canada agreement, for which vice president Mike Pence is currently trying to whip up congressional support.

In a welcome deescalation of the conflict, Conway stopped short of holding the nation hostage by threatening to sing “Tied Together With a Smile” until Swift, Todrick Hall and the Hadid family all accede to her demands.