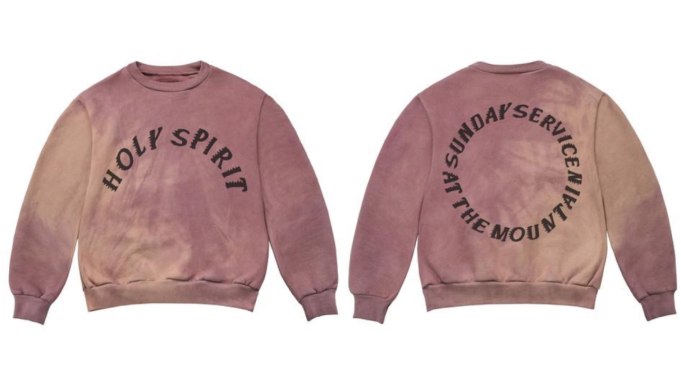 Kanye West’s Sunday Service wasn’t the only big draw on the last day of Coachella. Ye’s worship-inspired merchandise boasted lines that stretched across the field.

The self-proclaimed “church clothes” were available for purchase during the musician’s morning performance. The collection was made up of neutral-hued items each bearing various god-fearing slogans, including “holy spirit,” “trust god” and “Jesus walks” on a pair of socks. Prices for sweatshirts range from $165 to $225, and the socks are $50. A plain poncho with no text at all was also on sale for $75.

Online reactions to the messianic merch were… mixed.

“Yikes,” wrote one Twitter user. Another said, “I love Kanye but I ain’t paying $255 for a pretty basic hoodie.”

I love Kanye but I ain't paying 225 for a pretty basic hoodie pic.twitter.com/Iege8bQ0Hb

Kanye is selling merch that says “Holy spirit” on it for $200+….. I just… pic.twitter.com/NENIcVZgsR

50 bucks for some damn socks? Kanye needs to go up for prayer https://t.co/B5XOkCtWnT

For those participating in Couchella and thirsty for the good word gear, fret not, the items are also available at Kanye’s website. But, of course, they’re very different from the on-the-ground looks.

West surprised Coachella fans with more than just pricey attire. Last night, he appeared on stage during Kid Cudi’s set. And Sunday morning, there was a spread of breakfast goods available for purchase including fresh squeezed orange juice, chicken and waffles and breakfast burritos.

The service streamed live from Indio, Calif. Previously, West’s Sunday performances have been private and invite only.