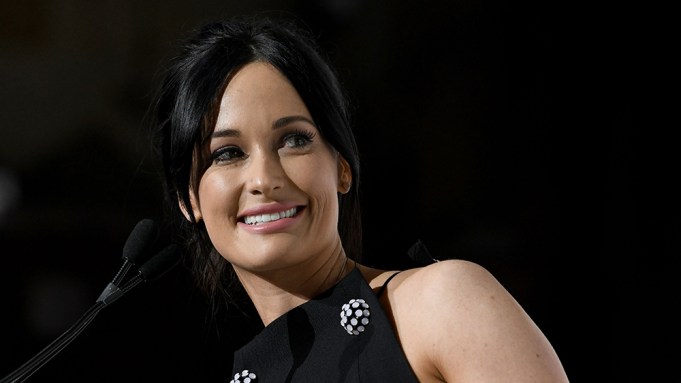 Kacey Musgraves, accepting her honor at Variety’s Power of Women presented by Lifetime luncheon on Friday, extolled the value of music education for young people in a climate that values arts education for students less and less, which is why she’s chosen to work with the Grammy Museum. The singer also talked about the education she’s gotten from spending her life studying under the tutelage of her favorite singers and their records — and the lessons she said she’s learned about what the music business expects out of a burgeoning artist.

“My guitar and songwriting teacher was this really great man named John DeFoore who taught out of this really small room in a haunted hotel from the 1800s, for real,” Musgraves told the crowd. “I’m very thankful for him. But of course I did have a couple other great teachers that come to mind: Loretta Lynn and Dolly Parton. Okay, they got the big hair and they’re frilly and they’re rhinestone and they’re glamorous, but they’re important for more than that. They’re writers and they wrote about real things — birth control, women’s libido, husbands that drink. And even if the subject matter was thought to be controversial and banned by radio, they had the courage to stay true to these visions in the face of disapproval, especially at that time. It must have required some gigantic balls.”

She may have something gigantic herself. “Starting out,” she told the crowd at New York’s Cipriani, “I found myself being told that I really shouldn’t write about certain things — weed, homosexuality… most of my observations on society in general. I was told that a debut female had to release something upbeat — the classic ‘Oh, we need something that everyone’s gonna like.’ And clearly  I don’t agree. So I really fought for my first single, which was ‘Merry Go Round,’ saying, ‘I’m willing to go down in flames for this song which you’re saying is not going to work. I just wouldn’t feel proud of myself if I altered this to try and sell more.’ And I was actually met with the word-for-word response from a grown man, one that runs a company, saying, ‘Well, sometimes in this business, you’ve just got to do things that you’re not proud of.’ And I said, ‘Well, that’s where you and me are very different.’

“I was appalled. So not heeding the warnings of this failure, I put out the song, and it’s still my highest charting single, and it ended up winning a Grammy for (country) song of the year. Little gold stars just reinforcing what I instinctively felt, that a woman’s perspective is important — but it’s even more important to have the courage and the opportunity to share it.”

Musgraves had already made a commitment to music education in her Texas hometown, before happening upon the Grammy Museum.

“A few years ago, I got to go back to little old Mineola and play a concert there,” Musgraves said, “and it was a really big deal to me. This was my first official homecoming. There are no music venues anywhere near my hometown, so we had to build one in the middle of a field, and it was a wild success with a huge turnout — and we raised $100,000. I donated the money to my high school’s student arts program. …. It was very important to me because it was the first time that I really got the chance to pay it forward. Because I remember me walking those same outdated halls, just bored out of my mind, and I was so geared to express myself. So the school was able to buy new equipment, musical instruments, and the money went really far. I heard from so many students about how excited they were to go to school again.

“This is why I chose to support the Grammy Museum and their work with sustaining musical education,” she continued. “Because the idea that I could play some small role in helping a kid who has the talent to become the next game changer is a really beautiful one to me.”