Jonas Brothers, Back After a Decade, Burn Up a Palatial Setting in ‘Sucker’ (Watch) 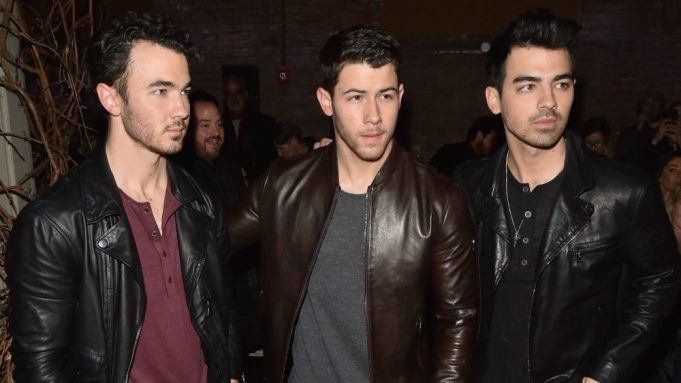 Ten years after brotherly love gave way to separate ways, the world is getting a bonus Jonas moment. The Jonas Brothers’ comeback video, “Sucker,” premiered Friday morning. It had a palatial setting substituting for Camp Rock, the brothers’ real-life wives or fiancés sitting in for Demi Lovato, and the memory of “Burnin’ Up” giving way to a royal flush for a fan base not so far into their 20s that they can’t succumb anew to the vapors.

Many questions are answered in the video. Like: Is Nick Jonas really going to wear those pink pants, as seen in the image for the single released earlier on Thursday? Yes, he is. Did Nick’s central positioning in that teaser photo indicate that he, now, is the frontman of the band, not Joe, as in the days of yore? Well, maybe not officially, but Nick does get the lion’s share of the falsetto lead vocals on this track, at least, though Joe gets to hold down the pre-chorus.

Also established: when you have significant others that clean up as well as Danielle Jonas, Priyanka Chopra and Sophie Turner, there is no need to hire out for models. The video has fun dressing them up in colors as fashionably gaudy as Nick’s tight trousers.

No standing on ceremony or Victorianism in the video’s Versailles-like setting. Corgis will be walked, conga lines will be formed, swords will be fenced, outdoor bubble baths will be taken, lollipops will be consumed, Kevin’s inaudible guitar playing will be mimed and a three-couple family portrait will be painted.

The song itself ditches the rock ‘n’ roll-rooted power pop the brothers parlayed in the 2000s for something squarely in line with the R&B-oriented pop of Nick’s solo career and Joe’s stint in DNCE — although it’s “clean” enough (no cake by the ocean here) that it’s almost as if their Disney Channel series never ended. Well, except maybe for those two fleeting shots of Joe in his skivvies suspended from red ropes, which suggest some kind of not-suitable-for-tweens horseplay going on in one of the palace chambers.

Immediate reaction to the Jonases’ return suggests the old fan base is ready to muster about a million times the level of enthusiasm they would’ve for another solo turn for any of the brothers. But will that amour fade by the time the trio get around to laying their presumed first album in 10 years on us, or is this burnin’ up an eternal flame?