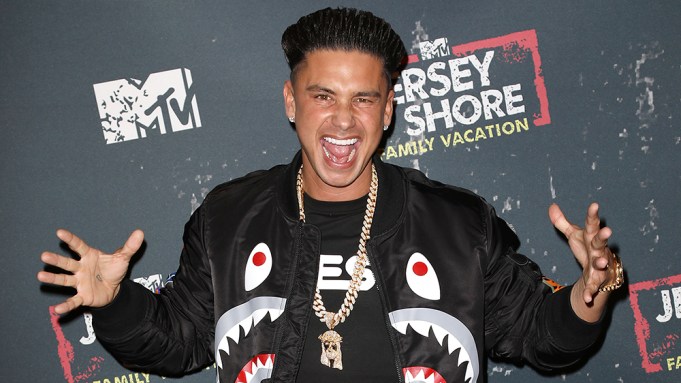 With a new reality show, “Double Shot at Love with DJ Pauly D & Vinny,” about to premiere on MTV April 11, Pauly D is debuting his latest song, “Silver & Gold,” featuring James Kaye, in a Variety exclusive (watch the lyric video above).

The track is a slow-burner with a summer-groove, slick beats and a catchy chorus tying together his love of ice (silver and gold chains) with true friendship (“I don’t need no new friends / I just keep the old”). It got a huge fist-pumping response from the “Jersey Shore” star’s audience at a recent show in Atlantic City at The Pool at Harrah’s when he slipped a snippet into the set. He worked on the track with producer Sean Ross last summer.

“Sean introduced me to an upcoming artist/songwriter he was working with named James Kaye and the three of us hit it off creatively and started coming up with more song ideas together,” says Pauly D (full name: Paul DelVecchio). “I loved how James sounded on an idea we had for ‘Silver & Gold.’ We played around with it and formatted a few things until it sounded perfect.”

The 38-year old Providence, Rhode Island native is fresh off another successful season of “Jersey Shore Family Vacation,” which premiered in April 2018 with an audience of 2.5 million viewers and is returning for season 3 in 2019. He also headlines a residency at Las Vegas’ Drai’s Beachclub.

No stranger to the music industry, Pauly D inked a deal with 50 Cent’s labels G-Unit Records and G-Note Labels in 2011, releasing several singles, including 2012’s “Back to Love” featuring Jay Sean. Guiding the successful DJ  through his next musical act is Holmdel, New Jersey based video content management distributor, Vydia. The company — a universal distribution and content management platform empowering artists, managers and independent labels with the tools to track and distribute videos to specific platforms, and collect data about performance — is headed by CEO Roy Lamanna, who founded Vydia in 2013.

In Vydia, Pauly found a new home with a familiar face: Tony G, who was head of A&R at G-Unit. “I had a previous relationship with Vydia’s West Coast A&R Tony G who introduced me to the platform,” he explains. “Vydia makes perfect sense for what I am trying to do musically.  It allows me to distribute my music independently, maintain creative control and retain ownership of my masters which is amazing for an independent artist like myself.”

Through Vydia, DelVecchio will be able to reach his already expansive fan base, which includes 3.7 million Instagram followers, 3.9 million Twitter followers and 8. 4 million Facebook followers. Vydia will offer content protection, rights management, accounting and analytics for “Silver & Gold,” as well as future releases.

Says Lamanna: “The way that we see it is the dynamic of artists and labels are changing through the streaming environment, and when you look at someone like Pauly who drives their own creative, writes their own song and sets up their  own collaborations, and the idea that they have this enormous audience that they have access to, whether in Pauly’s case having direct access to his show, but not everyone has a show. What artists do have is access through social media, and he has a strong social media following. The only thing that they are missing is an infrastructure around them, and that is what Vydia does.”

Vydia, he explains, handles the backend technology and infrastructure necessary to release music. The company provides a long arm of support, be it funding to create content for videos, paying the collaborators, tracking all of the data to see just “who is consuming the content,” single performance on various channels, including YouTube, Vevo, Facebook and Spotify, and even tags on Shazam. It’s a formula that has worked for the company’s relationships with Post Malone, Lil Pump, Mr. Eazi, Miky Woodz, Jon Z and Kevin McHale.

“It removes everything that an artist or a label needs to think about that doesn’t include creative,” says Lamanna. Vydia currently has over 200,00 users in 150 countries, with over 1 million media files and 458,000 monetized assets deployed.