The music supervisor got artists from Big Sean to Bob Seger to sign off on including their songs. But contributions from the stars themselves? That would've been too obvious. 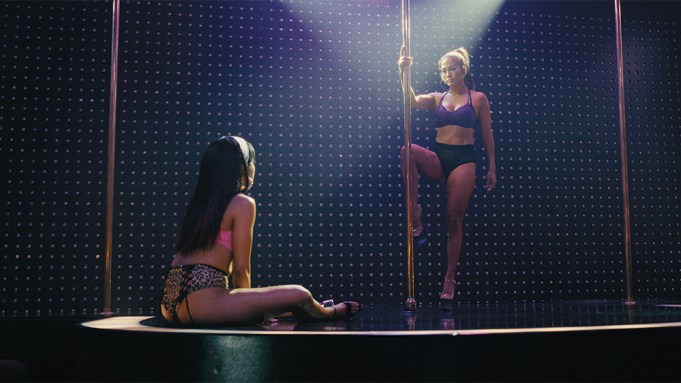 Contrary to what you might be expecting, the number of songs by Jennifer Lopez, Lizzo and Cardi B in “Hustlers,” their newly released acting vehicle, adds up to … zero. Meanwhile, the standout music sync in a movie that’s full of them belongs to no less likely a choice than Fiona Apple.

The scene in question features Lopez alternately bumping and grinding on the floor and working the pole against a backdrop of dollar bills and Apple’s classic “Criminal.” Says music supervisor Jason Markey, “I was very scared because Fiona notoriously says no to everything.” (“Criminal,” a major hit in 1997, has only been licensed for TV a half-dozen times in 22 years, and never for a feature film.) But apparently the singer-songwriter couldn’t say no to J.Lo’s 50-year-old bootie. “We sent her the clip and she approved it, so I would assume she just liked what she saw,” Markey says of Apple. “Maybe she’s not a fan of Jennifer, but when you watch watch her dance, it’s undeniable. It’s dramatic gold.”

Depending on your taste level, we have Markey to either thank or to blame for the fact that “Hustlers” doesn’t end with a splashy, over-the-top musical collab between costars Lopez, Lizzo and Cardi. (Think: “Lady Marmalade,” “Bang Bang” and the upcoming “Charlie’s Angels” anthem from Miley Cyrus, Ariana Grande and Lana Del Rey.)

“At one point, there was some conversation from the producers’ standpoint: ‘Should we do a big end-title song, like a ‘Lady Marmalade’ thing?’” recalls Markey, who runs the music department at STX Entertainment. But he wanted the film to evoke the grit of Martin Scorsese rather than, say, the camp of Baz Luhrmann. “I was the first person to stand up and go, ‘I think that’s cheesy!’”

Since music supervisors rarely have veto power in these situations, it helped to get the writer-director on board with his vision. “I said to Lorene [Scafaria] in sort of a private jest, ‘Honestly, I really don’t believe in having a Jennifer-Cardi B-Lizzo song in this movie — I just think we could do much better than that,’“ says Markey. “And not in a bad way in relation to their artistry, but we can end with a more poignant option, as opposed to this big pop number. And she agreed with me. So we stood our ground — and won the battle.”

Not that he has anything against pop smashes per se, but Markey had an eclectic mix in mind. “I love having the different styles of music in the movie,” he says. “It doesn’t lend itself to one type of sound, and it gives it the best Scorsese kind of feel. If you look at the trademark of his films, he never has a composer. He always uses songs to score the movie and to strike those emotional moments. We didn’t have a score, either; every song made a statement about the scene.” (Case in point: “Hustlers” opens with the voice of Janet Jackson, not Jennifer Lopez, whispering: ”This is a story about control.”)

In the end, Markey faced more intimidating challenges than the producers, namely sheer number of songs and a comparatively small budget, not to mention a tight deadline in which to secure clearances. “We started shooting the movie in January, finished at the end of April, went into post and had 16 weeks to finish all the music,” Markey says.

To make a point, he references another female-fronted movie: “On a normal movie that has a lot of music, like ‘Bad Moms,’ we had 33 songs but a 22-week post,” Markey says. “There are 60 songs in ‘Hustlers.’ And you have to go out to the artists, talk to the labels, talk to the publishers, call managers and ask for favors. It’s a job in itself to sit on the phone and beg for music all day because this isn’t a high-price movie,” he says. “I don’t normally have the funds because we’re not making major studio-budget films,” Markey says of STX. “I always tell my wife I’m going to get the license plate ‘IBEG4MUSIC’ because that’s what I do,” he jokes.

And to his credit, Markey generously shares the spotlight with his team: music director Lauren Danielak and music manager Meredith McBee. “They really are equal partners with me and they crush it every day,” he says. On “Hustlers,” “We think the music came out fantastic, but we’re super-happy that it’s over. It really was torture,” he admits, quickly adding, “but in a good way.”

One potential problem with casting artists as actors — Usher, for instance, makes a cameo — is that they tend to have strong opinions about music. And they’re very vocal. “We had cast him in the movie and he wanted a different song,” says Markey. “We had to call his manager and say, ‘No, we want “Love in This Club.”‘ The other song he was pitching was not even the right time period. That’s a whole other thing — Lorene was very strict and staunch about every song” being period-appropriate. After all, “Hustlers” is based on a true story that took place between 2007-14. “Keke Palmer had sent me her record, too, and said, ‘I have a bunch of music!’ And I said, ‘Listen, Keke, I love you. And I think that your music is actually really good. But it’s not of the era.’”

Another feather in his cap? Markey also secured the rights to Lorde’s “Royals.” “Again, I was definitely afraid [to ask],” he says. But before going Hollywood, Markey spent 20 years doing A&R at various record labels, which enabled him to have relationships with the men who manage the careers of Apple and Lorde (if not the artists themselves). “Jonathan Daniel, who manages Lorde, is a dear friend of mine,” says Markey. “I said to him, ‘Is this going to happen?’ And he goes, ‘I think I can make it happen, but there’s no guarantee.’”

And even though Lorde eventually said yes, the powers-that-be at the studio said no at first. “I don’t want to point fingers at the studio,” says Markey, “but they were like, ‘I don’t know about those two songs.’ And I’m like, ‘Those are the set-piece songs that people are gonna walk away from this movie and remember.’ Because nobody’s ever seen [Fiona Apple and Lorde] in those situations before. I remember some of the studio executives came to me like, ‘It doesn’t feel like our movie.’ And I’m like, ‘You don’t have to have anybody speaking because literally the lyrics are telling the story. It is mellow, but it’s f—ing bad-ass.’”

Apple isn’t even the artiest choice of all; that distinction belongs to avant-garde singer Scott Walker, who covered “Next” by Belgian singer-songwriter Jacques Brel in 1981. “Lorraine had been wanting to use that song for three movies,” says Markey. “She played it for me and I was like, ‘This is going to be insane. I don’t think the studio is gonna like this song.’” In this case, the artist couldn’t put up a protest, since Walker died in March. “It’s a slow-motion montage of guys getting wasted in the VIP room,” Markey says of the scene. “This was the one I didn’t think we were going to get approved. It lasted for about 16 weeks of everybody saying no or maybe, and we literally just kept calling. And begging.” For Markey, it was worth the wait. “This is another one of those moments that throws people through a loop and they’re like, ‘What the f—?’”

Much to the surprise of, well, everyone, male artists — a rock star and a rapper — turned out to be the toughest nuts to crack on approvals. “Bob Seger was very hesitant because of the drugs,” says Markey, referring to a scene in which the strippers dose a victim’s cocktail with a mix of MDMA and Ketamine while “Night Moves” briefly plays in the background. “He was like, ‘I don’t want to be referenced with that.’ So [the characters] go to the bathroom and the song drops out and then comes back up again. That was a negotiation. It took weeks of conversations to get that done.”

Granted, Big Sean may have been photographed partying with a posse of strippers in 2003, but don’t remind him. “We got a ‘no’ initially from Big Sean for [the Game’s] ’Money, Money, Money,’“ says Markey. “Everybody had an expectation of what this movie was. When you look at it on paper, you’re like, ‘Ugh, it’s a stripper movie. Blah! Whatever.’” Markey imagines what Sean’s first reaction may have been: “‘I’m a hip-hop guy. I don’t want to be that guy who is known to have his songs in a movie where they come in throwing hundred dollar bills.’ But it’s not that at all.”

Ultimately, though, the biggest problem wasn’t the sex, drugs and G-strings, but insufficient funds. “It was just a matter of whether the financials met the creative,” says Markey. “I didn’t have a lot of money, so just realize that these artists gave their songs. Let’s just say they came to the party.”