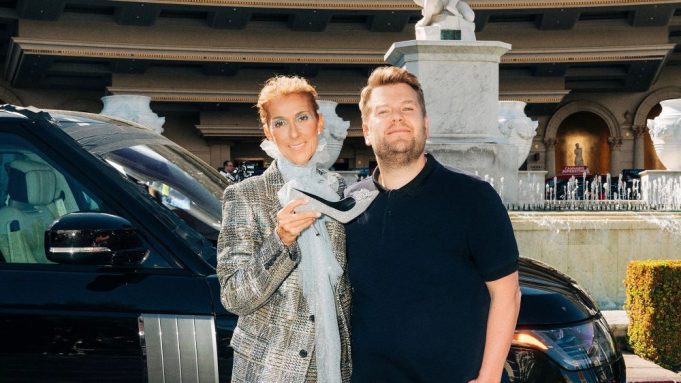 Anyone who has seen Celine Dion’s long-running Las Vegas show knows she plays the comedienne almost as much as chanteuse, with a goofball quality that came in especially handy on a Monday night edition of James Corden’s “Carpool Karaoke.” The 15-minute segment ended with Dion and Corden trading carpooling for ship-pooling and sailing around Las Vegas’ version of the high sea — the Fountains at Bellagio — with the CBS late-night host in a Leo moptop wig and the singer spreading her arms, Kate-like, at the tiny ship’s mast.

That may have been the highlight for “Titanic” buffs, but the segment’s real musical peak proved to be Corden coercing Dion into covering a song she had apparently never heard of before. “I can make something funny dramatic,” she promises him. “…What is ‘Baby Shark’?” “It’s difficult to pick up,” he warns her. “Luckily for me, I’m a musical guy so I can get my head around it,” he says, before providing a vocal guide she quickly picks up on. “I thought we were going to get a chest thump there,” he complains, and of course she reprises it to oblige him.

She sails, she swims with sharks … and she swears. Corden gets a bleeped “F—!” out of the diva when he reveals that he has conspired with her assistant to “have a slight cull of the shoes,” a warehoused collection that she estimates as holding a mere 3,000-5,000 pairs and he contends is said to be more like 10,000. “I need alcohol,” Dion says, after Corden announces they’re going to give away some of the singer’s extravagant high heels to random pedestrians on Las Vegas Blvd. The segment might have really gone into overdrive if “The Late, Late Show” had convinced Dion’s people to let them drive up to Dion’s shoe warehouse, but the sight of Dion half-gleefully, half-woefully handing out party favors on the Strip is good enough to ensure that her huzzahs will go on.

Dion’s longstanding Vegas engagement at the Colosseum at Caesars Palace ends June 8. But it will be followed by a new album and world tour, so as not to make a liar out of the singer when she tells Corden, “I just have a day off once a year, and today is that day.”