The group's performance was every bit as thrilling as the game itself. 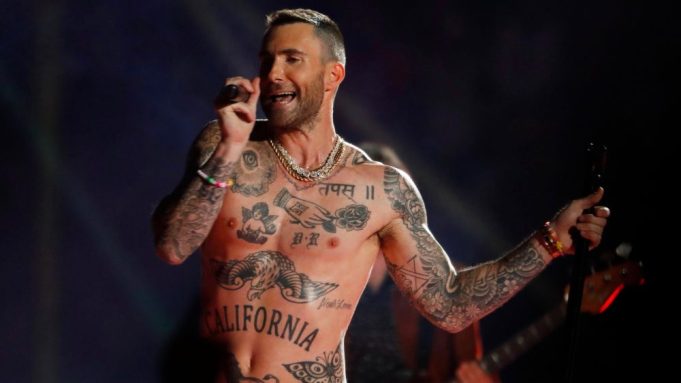 In the end, it was about abs, not knees.

Maroon 5’s Super Bowl halftime performance will by no means go down as the worst ever, but it immediately wins a trophy for most anticlimactic, with weeks of tense buildup leading up to exactly the fizzy 14 minutes you would have pictured in your head if Colin Kaepernick had never existed.

But we did get barechestedness for the first time since Super Bowl XXXVIII, and this time the cameras did not cut away but embraced frontman Adam Levine in all his well sculpted glory, as he made the last of three costume changes — trench coat stripped down to sweater, stripped down to tank top, stripped down to hubba-hubba — “Sugar” gave way to eye candy. Levine could not provide vindication for Kaepernick, but at least he could avenge the ghost of Janet Jackson, in a male-privilege kind of way.

For something that was supposed to explode with pop exuberance, the performance felt oddly denuded of joy, although maybe you could ascribe part of that to the fact that Levine has never been the grinning-est frontman even under less pressure-cooker circumstances. When a girl held up a balloon bearing the world “SMILE” near the end, I half-imagined that was an actual stage direction, though the appearance of Big Boi toward the climax did get Levine to crack one.

Through no major fault of Maroon 5’s, the 14 minutes felt even more disjointed than they needed to, thanks to the need to pass the baton to guest stars that is apparently de rigueur for any halftime performance now. Think of them as halftimes within a halftime. That’s how it felt when Travis Scott showed up and Maroon 5 seemed to slip out of sight for a while, before Levine reappeared to bop up and down a little beside him and strum two or three chords on his guitar. At least Levine and Big Boi looked like they had met prior to the game’s coin toss.

As for who could replace Cardi B (who was quite vocal about opting out because of her feelings about the NFL and Kaepernick) on “Girls Like You,” the answer was, it takes, if not quite a village, then a very incongruous gospel choir.

It would have been fun if the nod to SpongeBob had involved more than a fleeting bit of animation. More than a million Change.org petitioners had requested a performance of the show’s legendary Super Bowl halftime-spoofing “Sweet Victory,” which had been recently mashed up with Scott’s “Sicko Mode,” providing a perfect moment for harmonic convergence. But having already given up several minutes of their time to hip-hop cameos, Maroon 5 was not about to waste any of their time on that severe a degree of Weezer-agrees-to-do-“Africa”-style fan servicing.

What we got, besides that brief bit of Squidward, was a lot of the same pyro you see in an arena any night of the week, an M-shaped stage for branding’s sake, a nice Levine guitar solo to remind you of when his rock band was both rock and a band, and several of the better pop singles of recent years, including the irresistible “Sugar,” in the K-Tel commercial form this annual medium demands. And a sweet introductory dedication to Maroon 5’s late manager, Jordan Feldstein. And some drone-type orbs that spelled out “ONE” and then “LOVE,” which seemed to be the sole fulfillment of a wokeness quotient Levine had indicated would redeem their decision.

No knees taken, and no bows, but no walks of shame, either. When Levine puts a shirt back on, it should read, “I Survived Super Bowl LIII.” Given the sturm und drang of recent weeks, maybe that was setting the bar high enough.