Grammys 2019: Everything You Didn’t See on TV

With all the cameras in action at a major awards show like the Grammys, there are still many things that happen offstage or during commercial breaks that aren’t seen by the millions watching the telecast — but are spied by certain eagle-eyed reporters from their seats in the auditorium.

Here are a few highlights that didn’t make it to primetime:

Sweet sisterhood: In an evening full of surprises, the biggest was definitely the sisterhood moment when Alicia Keys brought out Lady Gaga, Jennifer Lopez, Jada Pinkett and, of course, Michelle Obama. Many people in the audience didn’t at first realize it was the former first lady, and the shrieks of recognition were deafening when she began speaking. The entire audience was on its feet at the end of that moment. 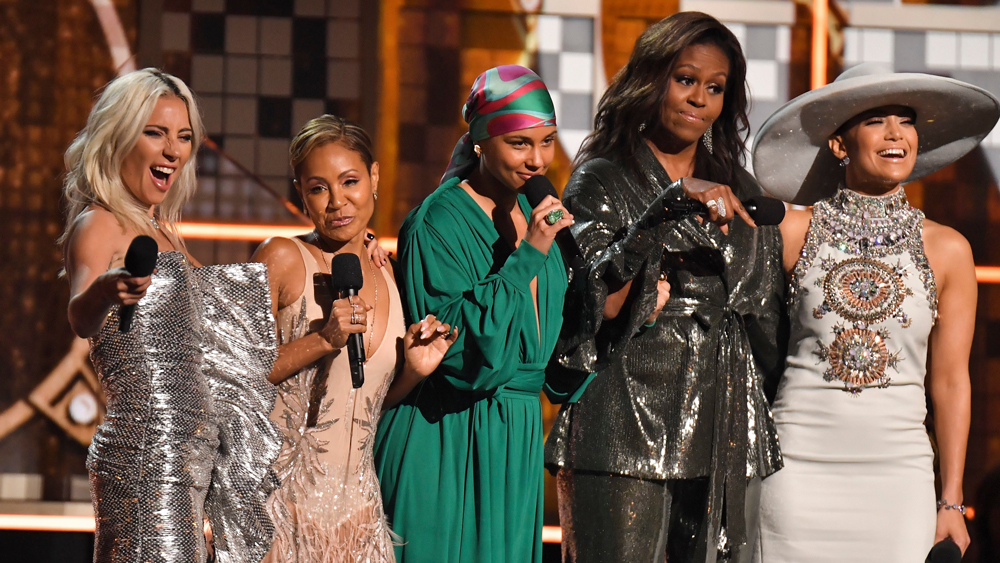 Drake makes an appearance, then bounces: The other biggest “ooooh!” of the night came when awards-show-shy Drake made his surprise appearance to accept his award for best rap song (for “God’s Plan”). The Grammys cut short his acceptance speech — not intentionally, they said — which left him speaking into a dead mic and then doing a little dance as a way of laughing it off. A few minutes later, Drake was escorted to his third-row seat by a very heavy security contingent. He watched Travis Scott’s set and then bounced.

.@Drake takes his seat in the third row, some dork a few seats away takes his picture (maybe he works for Price Waterhouse?) #Grammys2019 pic.twitter.com/DaXlfAk5hw

Women ‘stepped up’: A very different kind of exclamation arose from the crowd — more like an “Oooooo!!” — when Dua Lipa made a very public dig at outgoing Grammy chief Neil Portnow in her acceptance speech for best new artist. After saying what an honor it was to be nominated “alongside so many incredible female artists.  I guess this year we really stepped up” — a reference, of course to Portnow’s clumsily worded comment last year that female artists and executives needed to “step up” to get ahead in the industry. There may have been a directive that anyone saying those words onstage would be quickly cut off, because walk-off music started up unusually quickly, even for late in the show, and Lipa’s mic was cut off soon after.

Dispatches from the front row: As always, the front rows featured a bevy of top-shelf talent: Country music royalty old and new were in the front rows at the top of the show, with Dolly Parton seated near Kelsea Ballerini and Chris Stapleton and his wife, Morgane; Lady Gaga and her co-songwriter/producer Mark Ronson sitting next to each other; and Tony Bennett beside with his wife. The BTS boys rocked out during Shawn Mendes and Miley Cyrus’ performance, and Bebe Rexha standing up to dance when Alicia Keys sang “Empire State of Mind.”

Flea gets physical: Flea from the Red Hot Chili Peppers warms up for performances like a hyperactive basketball player (see below).

Miss Dolly: After the group finale of the Dolly Parton tribute — featuring Miley Cyrus, Kacey Musgraves, Katy Perry, Maren Morris and Little Big Town — the assembled performers didn’t seem to want to leave the stage, chatting and embracing and basically hanging around, in front of an audience of around 18,000 people, until stagehands gently encouraged them to continue socializing backstage.

The birthday queen: After Diana Ross’ performance, she spent a couple of minutes greeting fans in the pit next to the stage, with the extremities of her giant red gown occasionally spilling onto fans’ heads.

A scary situation: Toward the end of the show, a fan in the pit passed out and was pulled onto the stage during a commercial break, prompting a flurry of alarmed texts throughout the arena. However, a Grammy rep assured us several minutes later that the fan had become dehydrated, was taken backstage and was fine.

Wakanda forever: But perhaps the greatest non-TV moment was when, in mid-interview with Variety’s Marc Malkin, “Black Panther” composer Ludwig Goransson found out he’d won a Grammy. Watch the full clip below:

That time I was interviewing @ludwiggoransson and he found out he won a Grammy for @theblackpanther #grammys https://t.co/646TvFZavC