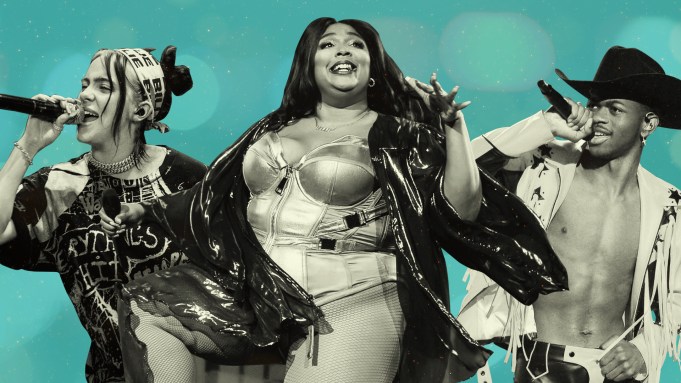 There’s a new class in town at the Grammys, as three newcomers — Lizzo, Billie Eilish and Lil Nas X — are the top nominees for the 2020 awards, with eight, six and six nods, respectively.

Ariana Grande, H.E.R. and Eilish’s brother and musical collaborator Finneas O’Connell are next with five (making 11 total noms for Eilish’s family), while eight artists, including Beyonce, J. Cole, Yola and Radiohead’s Thom Yorke, have four. The main categories — Album, Song and Record of the Year, and Best New Artist — which were expanded from four to eight for last year’s awards, are listed below. View the complete list here.

Surprises include two nods each for veteran indie act Bon Iver, alt-pop singer Lana Del Rey and R&B artist H.E.R. in the main categories, and although Taylor Swift is up for three awards, including Song of the Year for “Lover,” the album of the same name did not get an Album of the Year nod — although newcomer Lil Nas X’s “7” EP did. Also, indie acts Black Pumas, Tank and the Bangas and Yola scored Best New Artist nominations.

“I am in complete awe of the inspiring nominees who have poured their hearts and souls into their craft, and in turn, have provided fans worldwide a year of music that changed us, stirred our emotions and inspired us to do more,” said new Grammy chief Deborah Dugan. “Today’s announcement reflects a new era for the Recording Academy — an army of engaged members that welcomes diversity, embraces creativity and champions young musicians on the rise. It’s shaping up to be a year of firsts, and I can promise that the 62nd Grammy Awards will pack the same punch as this year’s nominees. I am proud to march forward alongside our members and nominated artists.”

The nominees are selected by special industry committees, and the awards are voted on by “the Recording Academy’s membership body of music makers, who represent all genres and creative disciplines, including recording artists, songwriters, producers, mixers, and engineers,” according to the announcement.

This year’s nominees were selected from more than 21,000 submissions across 84 categories for an eligibility period spanning Oct. 1, 2018 – Aug. 31, 2019, which reflects this year’s earlier-than-usual show date.