‘Game of Thrones’ Immersive Concert Tour to Resume This Fall

Included will be new arrangements from the much-talked-about final six episode scores. 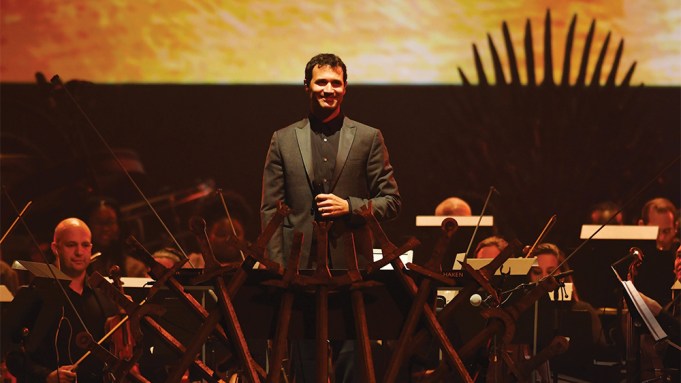 “Game of Thrones” fans who are dreading the end of their beloved HBO series will get one final chance to celebrate their favorite fantasy when the “Game of Thrones Live Concert Experience” kicks off a 20-city amphitheater tour Sept. 5 in Syracuse, N.Y.

Ramin Djawadi’s Emmy-winning score will be played by symphony orchestras in New York, Chicago, Los Angeles and 17 other cities in the U.S. and Canada while classic scenes from throughout the series, including the eighth and final season, are projected on giant screens in “an immersive outdoor concert experience,” according to promoters.

Djawadi himself will lead the orchestras at Jones Beach Theater in New York on Sept. 14; at Five Point Amphitheatre in Irvine, Calif. on Oct. 4; and at the Hollywood Bowl in Los Angeles on Oct. 5.

“Having first conceptualized the tour several years ago, Ramin will be reworking and redeveloping the musical and visual elements of the concert to create a brand new, live experience that encompasses fan-favorite pieces from the entirety of ‘Game of Thrones,'” the promoters said.

Included will be new arrangements from the much-talked-about final six episode scores, including Djawadi’s nine-minute “Night King” theme that went viral immediately after its debut in “The Long Night” episode April 28.

The tours are produced by Live Nation in partnership with HBO Licensing & Retail. Tickets go on sale through Ticketmaster at 10 a.m. Monday, May 13.