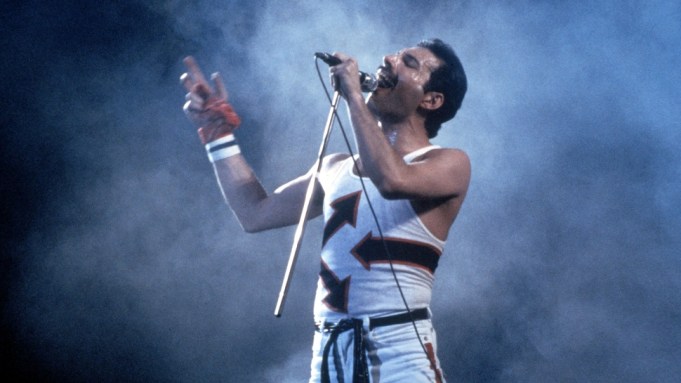 Universal Music on Thursday dropped the video for a previously unreleased — and great — version of a song from the late and legendary Queen frontman Freddie Mercury, “Time Waits for No One.”

The recording — which captures the singer in his full-voiced glory and is no flimsy posthumous release — languished in the vaults since it was recorded in April of 1986 for the concept album of the musical “Time,” with songwriter/ producer Dave Clark, leader of the 1960s group the Dave Clark Five. Featuring Mercury accompanied only by piano, it’s a dramatically different version from the heavily produced, officially released one, and shows a heartwarming performance likely to bring a tear to many a fan’s eye.

According to Universal Music’s announcement, after the original version of the song was released, “Dave Clark had always remembered that performance of Freddie Mercury at Abbey Road Studios from 1986. The feeling he had during the original rehearsal, experiencing ‘goosebumps,’ hadn’t dissipated over the decades, and he wanted to hear this original recording — just Freddie on vocals and Mike Moran on piano. After much searching through the vaults to find the version without all the backing vocals, he finally retrieved it from his tape archive in the spring of 2018.

“Bringing in original keyboardist Mike Moran to record a new piano track…Dave eventually produced the performance he had longed to revive – stripping back the 96-track version to a version with just one: Freddie Mercury.

“But the audio needed a visual and Dave didn’t want to just cut old footage together. He had the negatives from the 4-camera shoot and the unprocessed film which was being stored for a time at Rank Laboratories in Pinewood but returned to Dave. A four-day lockdown in a special facility to pore through the negatives with his editor led to the discovery and production of this visual masterpiece, a perfect representation of Freddie’s ‘magic performance….He tasted every word.’”

The song follows the global success of last year’s Queen biopic “Bohemian Rhapsody,” which became the highest-grossing music biopic in history, generating more than $900 million at the box office and an Oscar, Golden Globe and BAFTA Award for Rami Malek, who portrayed Mercury in the film.

Watch the video here or listen to the song here.