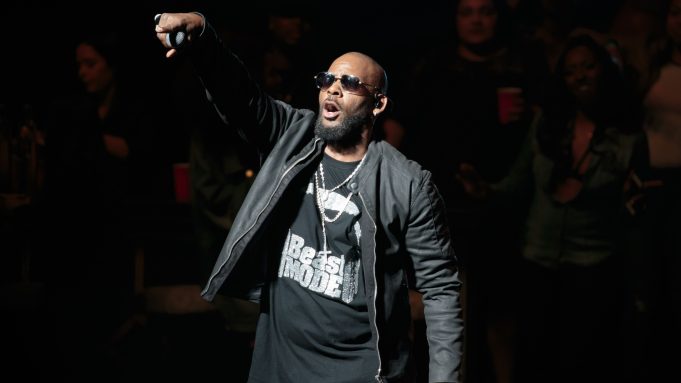 R. Kelly rarely has been silent when accusations against him have peaked over the past two decades, and he’s responded several times to the waves of criticism that have arisen in the days leading up to and following the airing of “Surviving R. Kelly,” a three-part Lifetime documentary in which multiple women accuse the singer of sexual assault and misconduct.

He threatened legal action last week, dropped a new song called “Born to My Music” on Friday, and on Monday a Facebook page was briefly posted teasing a forthcoming website called “SurvivingLies.com” that sources close to the singer reportedly told TMZ “will attempt to expose all of his accusers as liars as well as reveal their true motivations behind their allegations.” The site posted a video that it claimed contradicted the allegations made by one of Kelly’s accusers, although the identity of the people in the clip could not be verified.

Several hours after it was posted, the page was taken down by Facebook, which issued a statement to TMZ saying, “The Page violated our Community Standards and has been removed. We do not tolerate bullying or sharing someone’s private contact information and take action on content that violates our policies as soon as we’re aware.”

The page included text messages purported to be between Kelly and a young female who repeatedly called him “Daddy” — something most of Kelly’s accusers have claimed he insisted upon during their contact with him.

While documents show that he briefly married the late singer Aaliyah in 1995 when she was underaged, and child-pornography charges were brought against him in 2000 after a video surfaced that purports to depict him having sex with an underaged girl, Kelly has not been convicted of any crimes and has maintained his innocence.

Among many other comments, the documentary has reignited calls for RCA Records, Kelly’s longstanding label home, to sever its relationship with Kelly. However, partially because Kelly has not been convicted of any crime, the process may not be as simple as the label cancelling his contract, as entertainment attorney Leslie Frank, a partner of King, Holmes, Paterno & Soriano, told Variety last year.

“Contractually, some recording agreements say that if you are convicted of a felony or a crime of moral turpitude, generally speaking it is the label’s right to terminate the contract,” Frank said, noting that she has not seen Kelly’s contract with RCA. “Any record company — or, really, any party to any contract — can decide they no longer want to be in the contract. The question is what can happen as a result of them asserting their desire to terminate the term of the agreement, even though there’s no contractual provision saying that they can do so because he’s accused of the things he’s accused of. R. Kelly could sue for damages.”

Kelly not released any music on RCA since a 2016 Christmas album, although he has issued several songs independently on the internet — including a 19-minute harangue against his accusers misleadingly called “I Admit It” — presumably with RCA’s consent.