Continue to Variety SKIP AD
You will be redirected back to your article in seconds
May 27, 2019 2:21pm PT

Director Emil Nava talks about making the buzzy video that turned the pop superstars into the highlight of the silly season. 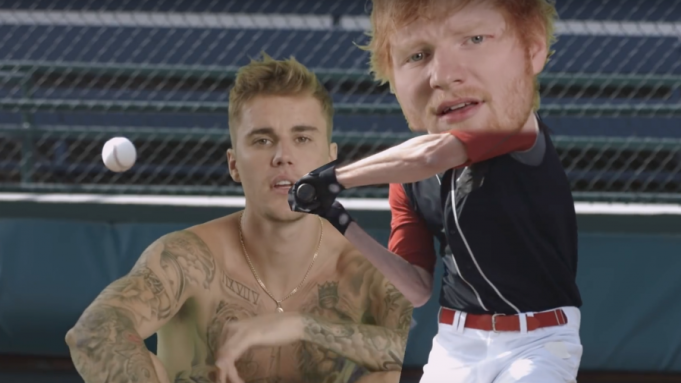 For anyone who is not furry-avoidant, and who has a funny bone for this sort of thing, picking a favorite moment from the new music video by Ed Sheeran and Justin Bieber single may be difficult — especially since so many of the gags in “I Don’t Care” fly by in nearly subliminal edits. Is that really a wedding scene of Sheeran in a bridal gown, marrying a cardboard standup of Bieber? Yes, it is. Who or what is in that split-second shot of the running of the bulls? You have to freeze-frame it to be certain that it’s Bieber, participating in the stampede dressed up as an ice cream cone.

“We really did put the kitchen sink in it,” says the video’s director, Emil Nava, who has trouble naming his own favorites. “There’s something that I love about Ed on a jet ski as a banana,” he decides. But then,  “I love the corn on the cob moment” — where Bieber, as the aforementioned cob, bounces up and down outside the hedges sheltering a pool party. “And then some of the other ones are just so mad, like where we have them running down the beach, holding hands. I especially like the kind of fake music video, where they’re both dressed as cowboys. And I love the wedding scene. God, there’s so many. I don’t usually laugh at videos I make, because I’m always agonizing over trying to get the story right or something else that is stressing me out. But with this one, it was impossible not to.”

It may go without saying that the stars didn’t really jet ski or run from the bulls in costume, any more than they engaged in same-sex matrimony. But it particularly goes without saying if you’ve actually seen the “I Don’t Care” video and have grasped just how much Nava made it his goal to create the green-screen video of all time. And it’s a video that announces its green-screen-ness from the start, with visual effects that are sometimes sophisticated but sometimes more like crude Photoshop art that a fan might make after too much ice cream, if not mushrooms.

“I was doing a talk at Stanford University,” says Nava, “and one of the students said they had been finishing a green-screen video and trying to make it look perfect, and then the video came out with Ed and Justin and they were like, ‘Damn! We have to do the opposite now.’” Nava was perfecting — or imperfecting, actually — something he’d toyed with in a previous attempt. “I did it a little bit for a video with Dua Lipa and Calvin Harris called ‘One Kiss,’ playing with the idea of actually seeing the green stuff. I feel like people are so oversaturated with these slick, really put-together, expensive videos, and it was almost like this was a video for all the fans, you know?” Keeping this one from getting too slick itself “was something that me and the team were constantly battling. Because when we made it look better, it looked better but it felt less amazing. Every time we tried to do something really well, it lost this obscure magic.”

The British-born director, 34, has been one of the top go-to music video directors in recent years, responsible for clips like Post Malone’s “Rockstar,” the Calvin Harris/Sam Smith hit “Promises” and work for Charlie Puth, Jennifer Lopez, Julia Michaels, Ellie Goulding, Hailee Steinfeld, Selena Gomez, Normani and dozens of other stars over the last 10 years. If he’s most associated with anyone, though, it’s Sheeran, with whom he’s hooked up for more than a dozen videos, including the MTV Award-winning “Sing,” “Don’t,” “Thinking Out Loud” and the Eminem collaboration “River.”

“This is on the funnier side of the ones that I’ve done,” Nava says, “but I definitely think that when me and Ed get together, we try and be lighthearted. We made this video for a song called ‘Lego House’ [in 2011] and it was the second video we did — second made, but first out — and we got Rupert Grint from ‘Harry Potter’ to come and be in it. There was a lot of comedy in that. But Ed always comes to me and says, ‘I’ve got this mad idea,’ and then I try and build it out and we go back and forth on where we want to take it. For this one specifically, he was adamant on dressing up in all these outfits. And then from my angle, I really wanted to try and pick apart music videos thought, wouldn’t it be fun if we just did everything kind of like amazingly bad, but also kind of like wonderful and like magical. … He referenced that when we first started doing videos together, we always felt we were trying to push the boundaries on videos — especially because in the early videos, he would be like, ‘Let’s just go completely different and I won’t even be in it.’”

With the “I Don’t Care” production, says Nava, “I’m not sure how many people would notice, but we shot a lot of those scenes for real, and then some of the shots were stock footage. So when we’re in the swimming pool or the wedding or the dinner or the dance or the tennis court, those are actually real shoots that we filmed, and we were able to thread them into it. … It was quite an intense process actually, because Justin was in Los Angeles and Ed was in Japan, on top of the main shoot with the cast (of extras) and big sets. So we had to do three shoots … I flew to Japan for one day to shoot with Ed and then flew straight back to L.A. to edit for three weeks. The edit was supposed to take shorter than it did, but once we started delving into it, I had to call up the record label and Ed and say, ‘I need a few more days.’ Because it ended up being like Pandora’s box; once we opened it and found things that were working, we wanted to push the concept. I really could have almost been at this for another month.”

Sheeran obviously trusts Nava at this point, and Bieber didn’t have much of a problem with sending up his image a little with an excess of cheerfulness. “With Justin, he’s such a legend and he’s done so much that he takes very little directing,” Nava says, “and Justin knew that Ed knew what he was doing… I think it’s the true legends that know how to kind of be a comedian with their performance and be able to just drop into different characters but still kind of retain their iconic-ness.”

The shareability factor was high in a league where success is measured in nine-figure and occasionally 10-figure views. “I think the ‘Thinking Out Loud’ video we did is at like two and a half billion views,” Nava says. “So when working with Ed, I always know that the benchmark is pretty high for us. But they keep creating new (measures of success). I think the big thing right now is how fast you can get to a billion views. I’ll be interested to see how this one progresses. But first and foremost we were just trying to make something that, one, everyone loves, and two, that people feel like they can watch again and again and again and not get bored.”

Nava describes himself as an “ADD director” but has had to slow his output a bit from his peak in 2014, when he made about two dozen videos in one year. “That was just an absolutely insane year. I’m not sure I could do that again,” he says. “Music videos are intense things. Right now I’m just trying to get a good balance. I opened a new production company/creative studio where I’m helping bring up different directors and work with different creatives. And then I also shot a movie last year, so I’m pushing into long form.” (This is not to be confused with “Free Spirit,” the 45-minute semi-feature he recently did with Khalid for the album of the same name, which had a one-night run in theaters.) Nava declines to give too many details about the forthcoming feature, other than that “it’s a mixed format, where documentary meets fiction, with focus is to really give youth a voice in modern-day movies. … I’m also being careful now to only really do the really good music videos, where we get to make pieces that are special.”

That degree of selectivity would probably not involve ever saying no to Sheeran. “I Don’t Care” has turned out to be a teaser for Sheeran’s July 12 album “No.6 Collaborations Project.” Nava hasn’t been put to work on a video for the second single, “Cross Me,” with Chance the Rapper, or any of the other duets, but asked if he’ll be participating on any more tracks from the album, he says, “I hope so. Ed’s always doing something, and I love when I get the phone call and it’s like: Action stations.”