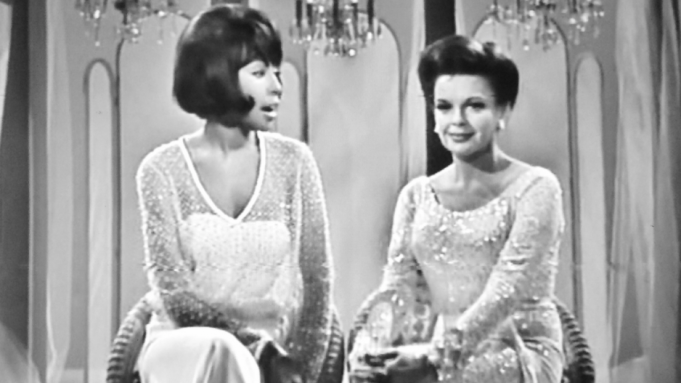 With Diahann Carroll’s death having been announced Friday, and with Judy Garland mania in as full a swing as it’s likely to ever be in the 21st century, due to the biopic “Judy” having just landed in theaters, there could be no better moment in history — at least since 1964 — to take a look back at the time when these two legends met up for a television duet.

They paired up on Garland’s weekly prime-time show 55 years ago to sing a duet of Harold Arlen and Richard Rodgers songs. If you’re thinking that Arlen and Rodgers were not a songwriting team, that was part of the gambit: The two of them took turns singing one classic songwriter’s work or the other’s. “You sing Arlen and I’ll sing Rodgers,” Carroll says at the beginning of the flip. “Roy Rogers?” asks Garland.

Carroll had good reason for being assigned the particular songwriter she was, out of the two. She had won a Tony Award two years earlier for appearing in the musical “No Strings,” with songs by Rodgers. (She was the first black woman to win a best actress Tony.)

Carroll had a couple of memorable solo numbers during the episode, too, making some transfixing eye contact with the camera as she sang “Goody Goody” (a song that in very different arrangements had been a hit for Benny Goodman in the ’30s and Frankie Lymon in the ’50s) and “Quiet Nights.”

The episode was taped Jan. 31, 1964 at CBS Television City. Carroll was 28, Garland 41. Judy was nearing the end of her career, and life, as she would pass away five years later. Carroll was still more at the beginning of hers, obviously with enough notoriety to get such featured billing (Mel Torme was the other guest) — she was a developing household name for everything from roles in the film versions of “Carmen Jones” and “Porgy and Bess” to being a mystery guest on “What’s My Line.” But her greatest notoriety was ahead of her, when the TV show “Julia” was built around her for three seasons beginning in 1968.

A nod is due to the website Vintage Los Angeles for quickly bringing the duet to everyone’s attention upon news of Carroll’s death. It’s been a source of interest and admiration, of course, for diehard fans of either or both singer-actors over the decades.

Wrote the Judy Garland Project website: “Ms. Carroll is a revelation on this show. Her appearance being yet another highlight of the series. Elegant and sophisticated, she looks like a beautiful bird in her Aghayan/Mackie creation in a setting that does not look unlike an illuminated birdcage. She sings ‘Quiet Nights’ and ‘Goody Goody’ solo, and then later on joins Judy for a wonderful duet with Carroll singing songs by Richard Rogers and Garland singing Harold Arlen. It is almost on a par with the Garland/Streisand singing in Show 9 for sophistication… One of the best medleys of the series.”