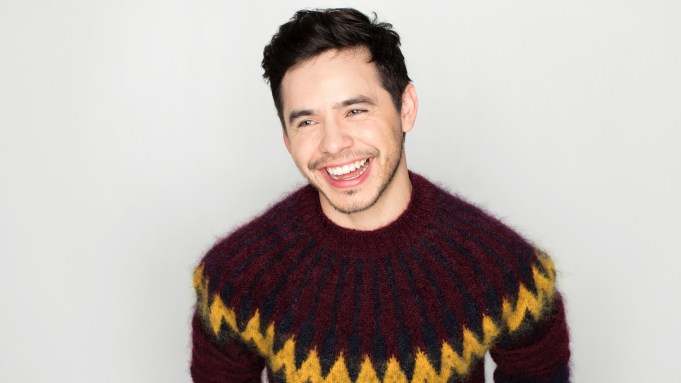 David Archuleta is getting into the holiday spirit with his new cover of NSYNC’s “Merry Christmas, Happy Holidays,” and the “American Idol” Season 7 runner-up is giving Variety a behind-the-scenes look at the making of the video, with outtakes featuring his good cheer-spreading co-stars Lance Bass and Chris Kirkpatrick.

“It was a lot of fun,” Archuleta says. “We had to edit out a lot of things that Chris was saying.  He’s just funny. I think he should be a stand-up comedian because he’s just so quick with his remarks and how he improvises.”

Kirkpatrick’s sense of humor is apparent in the clip, as NSYNC’s Bass jokes with Archuleta about the “challenge” of portraying the character of “Lance Bass,” while thanking the entertainer for “making our song sound good.”

Not missing a beat, Kirkpatrick shoots Bass a look, quipping, “Like it didn’t sound good in the first place? It was amazing. We had (“Different Strokes” star) Gary Coleman in the video!” Coleman famously portrayed an elf in the original clip.

While Archuleta’s new video — which features the Idol dancing in his kitchen, making cookies and singing karaoke with holiday guests adorned in ugly Christmas sweaters — doesn’t have  a sitcom star for a guest turn, astute viewers will notice “Big Brother” Season 21 contestant Kat Dunn making an appearance. Although not an actress (Dunn is a digital marketing executive), she ran into members of Archuleta’s management team at an event and was invited to be in the video. “She basically said, sure, I’ve never done that before, but why not?” the 28-year-old Utah native laughed.

Archuleta’s latest album, a deluxe re-release of 2018’s “Winter in the Air,” also contains his covers of Nat King Cole’s “The Christmas Song” and an a cappella version of “Still Still Still.” He is currently on the road with his 2019 Christmas tour.

The NSYNC cover has been “a fun little addition to the shows,” says Archuleta, who gets audiences in the spirit by piping in Christmas carols sung by Johnny Mathis before he takes the stage. ” I’ve done it on a couple shows on this Christmas tour so far. It’s a moment where people can let loose a little bit,” he said. “I make sure everyone gets up out of their seats and starts dancing with me. “

With his Christmas tour in full swing, Archuleta was unable to catch the live announcement made by “American Idol” judge Lionel Richie on “Dancing With the Stars” that Layla Springs won the fan vote to come back for a second chance on the 2020 season of the ABC show. The reality singing competition called back three fan favorites — Spring (Season 16), Shawn Robinson (Season 17) and Logan Johnson (Season 17) — and played their audition pieces from L.A.s’ Whisky a Go Go during the American Music Awards.

Aruchuleta was happy for his friend, Johnson, who got another opportunity for the public to see him featured. “It gives people another chance, and that’s pretty neat,” he said.

As for 2020, Archuleta revealed there is new music in the works. “I’ll be announcing quite a bit, actually, in the next couple of weeks,” he teased. “I’ll be releasing some new music and people can keep an eye out for upcoming shows as well.”