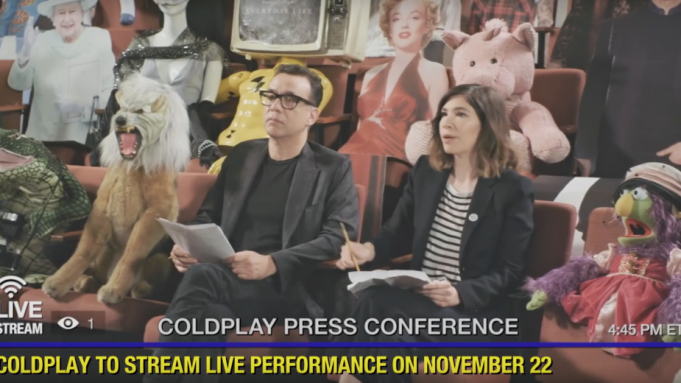 Journalists hate it when other people are better at their jobs than they are — so expect a lot of reporter jealousy aimed at comic actors Fred Armisen and Carrie Brownstein (“Portlandia”), who play members of the media in a faux press conference hosted by Coldplay in a new promotional video.

Coldplay are finding novel ways to promote their upcoming double album, “Everyday Life,” starting with announcing the project via classified ads. A rather grander stunt will have the band premiering the two halves of the album in a pair of concerts being live-streamed from Amman, Jordan at dawn and dusk on release day, Nov. 22.

And to promote that promotion, the band staged a presser in which Armisen and Brownstein are the sole “journalists” on hand, amid stuffed animals and standees, sometimes switching chairs or accents or even, in one instance, usurping Chris Martin’s role in leading the press conference.

The video begins with Martin describing “Everyday Lie” as “a very short double album,” then cuts to the twosome asking questions like “Why not Toronto?,” “Why still continue with Coldplay? Why do it?,” “What would you say to naysayers — like if I came up to you and said nay nay nay?” and, as only Brownstein can journalistically deliver it in the form of a question, “F— you.”

In a more serious press release, Martin said of the pair of Jordan shows, “These two broadcasts have been our dream since we first started work on this album. It’s a bit impossible and a bit scary, like all the best dreams. YouTube is the perfect home for it.”

“Sunrise” will be performed at 4 a.m. GMT, which will definitely be way before sunrise in America — 11 p.m. on the east coast and 8 on the west. Conversely, of course, the second half, “Sunset,” will go on at 2 p.m. GMT … i.e., in case proximity to sunrise in America, with the appointed hour working out as 9 a.m. eastern time and 6 a.m. on the west coast.