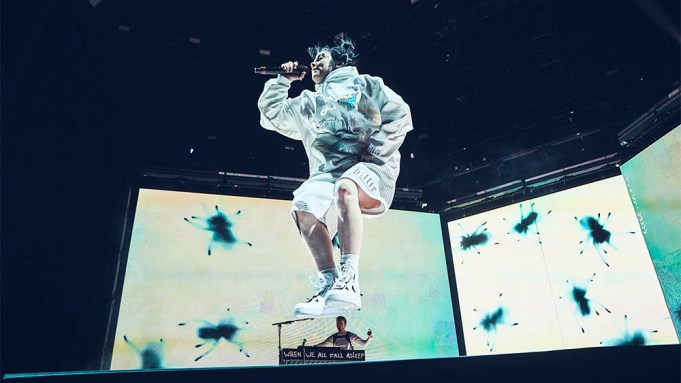 Rock isn’t dead at Coachella, a vast amount of evidence to the contrary notwithstanding. It was alive and well in a performance by Billie Eilish that pushed every rock ‘n’ roll button except the one that demands there be an electric guitar on stage. The 17-going-on-35-year-old star literally bounded through close to half the songs, her white high-top sneakers catching enough air to nearly batter her rear end… then, kicking it down just as many notches when it came time to take to a stool and go all confessional, in another fine rock tradition. It turns out one of the best ways that she is old before her time is that, in spirit if not exactly sound, she comes off as the reincarnation of an old-school punk-rock kid.

Eilish’s non-headlining but really effectively headlining performance was the most anticipated performance of the three-day weekend at the Southern California desert’s conjoined polo clubs. Or, at least she was in a dead heat for that position against whatever Ariana Grande is cooking up to close the festival Sunday night. Eilish was booked onto what everybody knows as the second stage — the Outdoor Theatre — and the crush to get into the available space was serious nowhere more than the fenced-off guest/artists area, where even model-actresses used to maintaining their personal space got perhaps their glimpse of what it’s like to be in the thick of it at a Palladium show. It might’ve seemed like an error on Coachella’s part not to book Eilish onto the main stage, but in the end it felt right, like a nascent star’s last club show before acceding to big-league status, even if the “club” here probably allowed for six-figure attendance.

Your initial inclination might also have been to say, “Poor Tame Impala,” since that one-man band, Saturday’s ostensible headliner, was always destined to go as less of an attention-getter for the day — even before a half-hour-late start time for Eilish’s show meant she overlapped their time on the main stage by at least that long. But in the end, maybe Kevin Parker doesn’t need our sympathy. He and his pickup crew did just fine for themselves, and Tame Impala’s show ended up being a very chill-out way to end the day (at least for those who didn’t end it by then heading over to Kid Cudi’s higher-energy, overpacked midnight performance in the Sahara tent).

Tame Impala is tamer these days — and that’s not a knock. They may be known to a lot of the vast crowd as that band that has that one harder-edged hit that they’re never quite if it was by the Black Keys are not. but what Parker and his falsetto are literally up to lately is something a little closer to that brief period when late-period R.E.M. was trying to sound like Brian Wilson at his mellowest. Parker, a guy who knows how to pace himself, put his most high-energy songs in the middle of the set, and then let the show end on a prettier and more contemplative note that was a very effective antidote for the peaceful end of a burnout-inducing day, letting Coachella day 2 ride into the sunset about four hours after sunset.

Tame Impala is a primary example of a phenomenon being seen in and out of Coachella: how rock bands (or in this case, solo acts operating in the guise of a rock band) are reinventing themselves for a post-rock era, or desperately trying to. You could see it recently in Muse (not at Coachella) going for a more electronic sound, and it was definitely evident in how one of Friday’s main-stage acts, the 1975, has gone all but guitar-less in the thrust of their latest material. Tame Impala has just released a couple of new songs, which indicate that the forthcoming album will not exactly be full of bangers, but will deliver some goods nonetheless. It feels like Parker is actually figuring out a place for himself in a slightly more ambient landscape somewhere between the rock of yore and going cravenly pop — a place that glides smoothly into a space that doesn’t sound too foreign to either of those possible audiences.

Preceding Tame Impala on the main stage, though, was Weezer, a band that couldn’t really change its stripes if its life depended on it. And based on a slightly quizzical comment that Rivers Cuomo made near the end of their set, maybe they dothink their life depends on it. “You never know. This could be the last time Weezer gets to play Coachella,” Cuomo said, “so we really appreciate you kickin’ it tonight.” And then they went straight into their famous cover of Toto’s “Africa,” which has been their way of staying relevant to a mass audience in the late 2010s. (Who would have guessed we’d ever be typing that last sentence?) What did he mean by that, you wonder? Was he just imagining, as older bands might, that Weezer someday too will go the way of all flesh? Or was he reading the tea leaves based on what a complete anomaly it already is for a guitar-based band like theirs to get a slot anywhere on the Coachella bill anymore?

Weezer first appeared to the vast field in disguise, suddenly appearing spotlit on a handicap ramp adjacent to the stage, dressed up in suits and wigs as a barbershop quartet for a brief a cappella version of “Beverly Hills” (which they would later return to, mid-show, in all its electric glory). Most of the crowd, probably not accustomed to such goofiness, seemed confused about who those dudes were, although, when the wig-free band came on a couple of minutes later to officially begin with “Buddy Holly” (following a snippet of Bill Haley’s “Rock Around the Clock” that covered their transition), all was cogent. It’s interesting to imagine what kind of statement Cuomo was making with the introductory bit: Is he agreeably suggesting that rock is as in danger of becoming a thing of the past as the barbershop genre? Maybe, but knowing him, it was probably just meant to be funny.

One thing is for sure: “Hash Pipe” remains a clarion call. It doesn’t matter if you’re playing to a gathering that more closely resembles a rave than an old-fashioned rock festival anymore. Once you play the opening bars of that song, even the most rock-resistant EDM kids will remember riding in the car with their parents playing KROQ and — we can vouch for this sight — literally come running from all directions. God bless “Hash Pipe.”

As an opening act, Weezer had the kind of act that is supplanting them in the popular landscape, a memorable set by J Balvin (see review). Competing against him over in the Gobi tent was Maggie Rogers, the kind of young artist who, like the previous day’s Kacey Musgraves, rides the line between pop and singer/songwriter/adult-alternative, and well. On record, Rogers’ material can feel a little sullen — and not in a bad way — but in performance, her lively spirit, constant motion and big, big smiles made even the overtly bummer songs feel like big celebrations. Whatever anyone thought of Rogers’ “SNL” performance, or whatever expectations anyone had of her demeanor based strictly on the sobriety of the record, she was a dynamic entertainer at Coachella, and you could feel her joy as the appreciative tears in her eyes became almost indistinguishable from the glittery makeup on her eyelids on the overhead screens.

But on the dynamism scale, even a surprisingly festive and restless Rogers hardly rated against the big, theatrical ups and downs of Eilish. She’s all about — well, partly about — going from a whisper to a roar… emphasis on the whisper, but never more than a verse or a ballad away from explosiveness. Most of the theatricality is in her own performance, but there was one extended setpiece that had a group of dancers joining her on a giant, very tilted bed. (Taylor Swift may not like Kanye’s tilted stage, but we suspect she’d like Billie’s more.) They, like she, were dressed all in white. When it was just her, and those sneakers and white cargo pants are part of the garb, she looks ready for a workout. But when the extras showed up, to give vision to Eilish’s sometimes unnerving songs about anxiety, you might’ve recognized it as something closer to hospital chic.

That prop bed was tilted enough that the dancers had to be strapped on so as not to fall off, and Eilish made further use of the harness when she stood on it alone and leaned forward, in a kind of off-kilter nightmare vision. That Eilish can sing so directly about depression, sleep paralysis and other mental health issues, but also make the music and show feel like an exuberant celebration of life, is one of the great gifts she’s already evidencing. In her new album’s most harrowing, she might sing from the despondent point of view of a jumper. But live, she was all about a different kind of jumping. If there’d been any space available anywhere but on stage, you might even have wanted to join her in a celebratory kick.