Chaka Khan: ‘If I Can Inspire Anybody to Do Themselves, I’m Happy’ 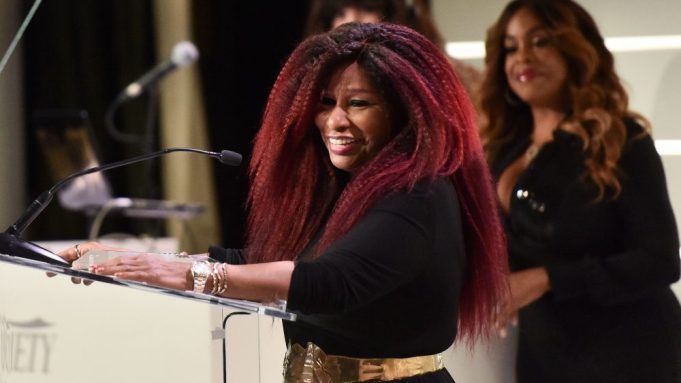 Chaka Khan was among the most emotional of the honorees at Variety’s Power of Women luncheon Friday, telling the assembled guests: “If I can inspire anybody to do themselves, fearlessly, I’m happy. God knows I have.”

After being introduced by Niecy Nash at the star-filled event at the Beverly Wilshire Hotel, Khan related a childhood anecdote about a family prophecy. “I truly feel blessed,” the singer said. “When I was a little girl, around 6, I had a great-grandmother (that) started her own spiritual church. She was a psychic and … a very, very brilliant woman, and she read my palm one day and she said, ‘One day everybody’s going to know your name.’ And I kept running around because I was 6 —  what did I care? But in retrospect … (the) s— must be real. Because a lot of people do know my name.”

Just how well people not just know but enjoy Khan’s name was evident earlier, when fellow honoree Mariah Carey referred to her as “the legendary, incredible Chaka-Chaka-Chaka-Chaka Khan,” riffing on the alliteration made popular in name-checking songs like “I Feel for You.”

Khan laughed at one point about how she was struggling to stay on course with the acceptance notes her partner-manager had helped her write, finally determining that “I’m just gonna say what I feel from my heart,” which she did, to the audience’s delight, in an extemporaneous speech that touched on everything from what she learned from the cold winters back in Chicago to meeting with cancer patients in the present day.

“I’m just a hard worker, and I love people, and I just love to sing,” Khan said. “Singing is my sanity. When I’m not singing and creating, I’m hurting myself. And it’s not been easy. And it still isn’t. But I love it so much.”

Khan recounted her beginnings with Rufus, when “that was a popular thing, for a black girl to be the singer in a white band. And I used to work on Rush Street in Chicago. Are you hip to Rush Street?” she asked the crowd — before addressing her mother: “I worked all the clubs and I was way underage. I was like 14, 15, sneaking out to do those things — Mom, you know that now! I must have been in maybe five or six bands before I got with Rufus, just singing around the neighborhood. And the one thing Chicago did for me … the weather.  You have to earn your stuff. In Chicago, you have to pay rent somewhere or be in a homeless (shelter) when winter hits. You have to be indoors or you will freeze to death. When I moved out west here, I called my mom on Christmas and said, ‘Mom, I’m riding a bike in the Valley and it’s like 80 degrees.’ It seemed so unnatural to me. The weather does, I think, really influence how you turn out, wherever you came from.”

Khan was being honored for her work with Little Kids Rock, a New Jersey-based charity that provides instruments and materials for music-based curricula for public schools across the country. But her heart for children extends to other areas, and she was clearly touched by the speech of another honoree, Dana Walden, the chairman of Disney Television Studios and ABC Entertainment, who had spoken movingly about cancer. A teary-eyed Khan thanked Walden and shared her own experiences.

“I visit children in hospitals, little kids with cancer and drug diseases, and if you want to really get a fix on what’s going on, do that,” Khan said, adding that she was “really scared” the first time she visited one of the top hospitals for afflicted children in the South, thinking “I would want to kill myself” after sharing their pain. Instead, “these kids were bouncing off the friggin’ wall., they were so full of life.” She spoke of being moved to her core when one of the first little boys she met said “God bless you” to her.

“This was a child. They’re so wise and beautiful. and this really leveled me out when I started doing that. I started seeing what life is really about. And at my age, now I see how short it is, and how much needs to be done. That’s what needs to happen.

“I sing because I have to — and I love to. And that’s the payoff for me. That’s the magic of my life.”