Chadwick Boseman Remembers Nipsey Hussle: ‘He Lifted Up the People Around Him’ 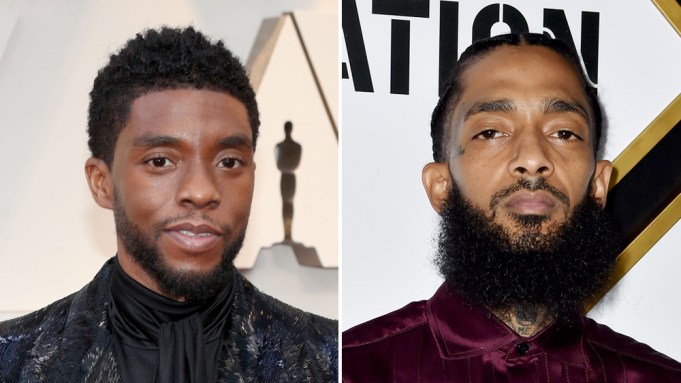 “Just remember that he was a person of his community, that he lifted up the people around him and that to me is everything,” the “Black Panther” star told Variety‘s Marc Malkin at Cinemacon on Tuesday. “It was authentic and I think that authenticity just rings true.”

The 33-year-old rapper, whose last album, “Victory Lap,” was nominated for best rap album at this year’s Grammys, was killed on Sunday after a shooter fired multiple rounds at him and two others in front of his Los Angeles clothing store.

“You could tell he had so much more to give than he got to show and that’s heartbreaking,” Boseman said.

The actor also shared his thoughts on the rapper’s death in an Instagram post featuring a charcoal drawing of Hussle. He captioned the image: “Such an impressive mind and talent. Everywhere your feet touched the ground you inspired. And even as your spirit flies free you ignite our souls. Let the many who you have made bold rise up and carry the torch. RIP Nipsey. Rest in Love, King.”

Boseman is far from the only one to publicly respond to Hussle’s death. Drake, Rihanna, Cardi B, Chance the Rapper, John Legend, and Ava DuVernay are among other celebrities who shared their mourning in heartfelt posts on social media.

Boseman also told Variety, “I think with him, the learning came in his life and people will understand what he was saying now that he’s gone.”