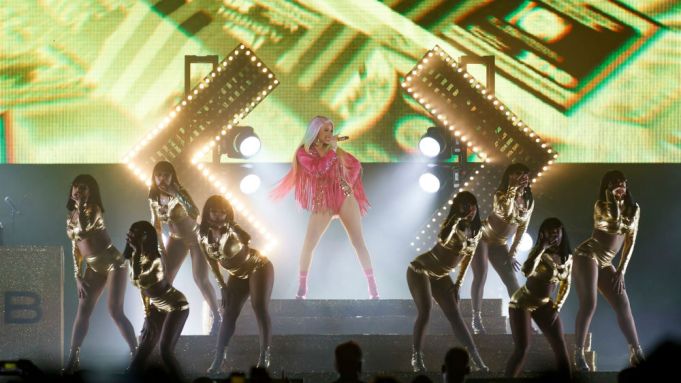 Atlanta has been in full Super Bowl mode all week, and not surprisingly, the dozens of events taking place in town in advance of the big game reached a peak on Saturday. Along with concerts by Bruno Mars and Cardi B (more on that in a minute), there was the Maxim party with Future, Diplo and Jamie Foxx; the Foo Fighters DirecTV concert; the Sports Illustrated party with Lil Wayne; and the Rolling Stone fete with Young Thug and Ludacris.

The day started off with the Fanatics party held at the College Hall of Fame and hosted by Philadelphia 76ers co-owner and Fanatics executive chairman Michael Rubin. Celebrities including Kevin Hart, Yo Gotti, Emily Ratajkowski, Gary Vaynerchuk, and Dr. Oz were treated to a feast of fresh served sushi and sashimi, shrimp and grits and mac and cheese while mingling with past and present athletic greats like Julius Erving, Dez Bryant, Emmitt Smith, Matt Ryan, Jerome Bettis and Ray Lewis before being treated to performances by Meek Mill — who Rubin flew by helicopter directly to a Sixers game when he was released from prison last April — and Cardi B.

Meek launched his set with “I’m A Boss,” then followed with “What’s Free,” before going right into a new version of “Going Bad,” which saw the Philly rapper shift his bars ever so slightly to “I took Lori Harvey off my wishlist, she’s what Trigga Trey wanted for Christmas,” so smoothly that most of the audience appeared not to register the change.  After “The Intro” didn’t elicit his desired response, Meek chided the audience, “Robert Kraft in here, milly rockin’ … what’s wrong with y’all?”

Kraft must’ve been in a dancing mood, because the Patriots owner couldn’t keep still, jumping onstage while Cardi, clad in a custom Louis Vuitton monogrammed number, performed “Money.” Ratajkowski popped up from her perch to stand on the sofa where she’d been seated at the side of the stage to snap photos.

Despite the party vibe, the event brought attention to more serious matters. Rubin addressed Meek Mill’s incarceration during last year’s Super Bowl and revealed that Cardi was one of the first to make a significant donation to Reform Alliance, the criminal justice reform organization he launched with Kraft, Meek Mill, Jay-Z and Van Jones, the latter of whom who was also in attendance at the event.

“It meant the world to have Meek performing at our Fanatics Super Bowl party this year, especially since he was unjustly incarcerated this time last year and couldn’t join us. This was a special moment for both of us and hopefully we can cap this weekend off with a Patriots win,” Michael Rubin told Variety.

The event served as a midday warm-up for Cardi, who hit the stage at State Farm Arena around 10 p.m. for closing night of the Bud Light Super Bowl Music Fest.  Clad in a pink patent leather coat over matching bra top and bottoms Cardi apologized to the audience in advance for her explicit language.

“I know y’all here with your kids, I’m sorry I curse too much sometimes!”  Cardi said.

Flanked by eight dancers in gold, Cardi performed abbreviated versions of “Backin’ It Up,” “No Limit,” “She Bad” and “Motorsport,” before ditching her jacket, telling the crowd, “This jacket is cute but it’s very hot. One second while I do wardrobe — you know…”

“Alright let’s get some drippin’ on!” Cardi said as her DJ led her into her Migos assisted hit, “Drip.”

Cardi paid homage to expectant mom Kehlani, telling fans, “I did this song with my friend… She’s pregnant right now having a beautiful little girl,” before rapping her verse off “Ring.” The rest of her set included “Be Careful,” her Maroon 5 collab “Girls Like You,” “I Like It,” “Bickenhead” and closed with “Bodak Yellow.”

By the time Bruno Mars hit the stage at 11 p.m., the entire State Farm Arena was filled to capacity. As the lights dimmed in the venue and the first notes of “Finesse” began playing, grown adults couldn’t contain their excitement, some dancing others running to their seats to watch the singer take the stage.

Wearing red a red white and black windbreaker shorts set and flanked by dancers in matching sweat suits, the charismatic crooner bounce stepped and grooved through a 90 minute set that visited favorites like “24K Magic” “Treasure,” “Perm,” “Woke Up In The Sky” and “Chunky,” while fans sang along, embraced each other, danced in aisles, smiled — and some even cried.

Mars kept the crowd enraptured for over an hour as he effortlessly shifted from up tempo to ballads, all the while his background singers and band members keeping step.

While Mars, a two-time Super Bowl veteran himself, didn’t make any references to the game or the controversies around it during his set, the crowd that assembled to watch his show on Saturday night — with its wide variety of ages, ethnicities and sexual orientations — was a statement in itself.

You're my perdition Bruno Mars 💘 pic.twitter.com/Py5ti55nSV