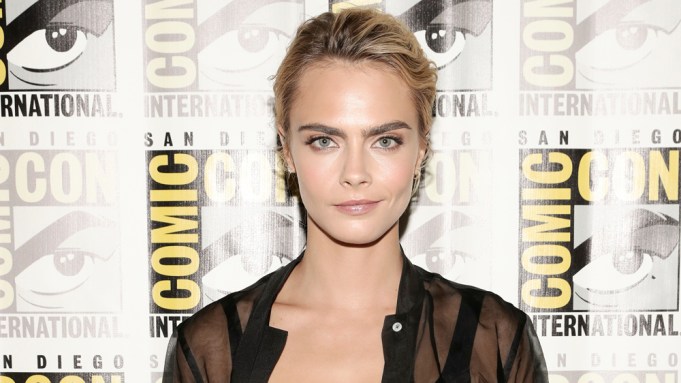 Cara Delevingne and Orlando Bloom’s love affair may be at the center of the upcoming Amazon Prime Video series “Carnival Row,” but the British actress doesn’t want viewers to assume her faerie character is heterosexual.

“I’m a pansexual faerie,” Delevingne told Variety during an exclusive one-on-one interview at Comic-Con adding that there are other queer characters in the show.

“All faeries generally are,” she said. “They don’t see gender. It’s all about who they are and their hearts. A lot of the things that weren’t written in the script, we made them so. Obviously, I didn’t say, ‘I want to be a pansexual faerie,’ but it made sense that all faeries kind of just love who they love.”

The series is set in a neo-Victorian fantasy world where immigrant creatures resettle in human land after their forest homeland is invaded by man.

“It’s really talking about immigration and refugees and classism and sexism, racism and elitism,” Delevingne said.

While “send her back” isn’t used in the series, the trailer shows one politician saying, “Go back to where you came from.”

Bloom spoke to Variety’s Audrey Cleo Yap on Friday before the “Carnival Row” panel at Comic-Con. “It’s so current and topical,” he said. “It sort of addresses a lot of what we are experiencing today but with the added component of a fantasy period sort of feeling. We can explore these issues that are going on in the world today with a kind of empathy and objective quality that doesn’t feel like it’s banging you over the head.”

Later, during the panel, Bloom claimed that Republican San Diego Mayor Ken Faulconer bolted from Amazon Prime’s “Carnival Row” activation earlier in the week because of the immigration themes. A rep for the mayor insisted that he had to leave because of time constraints.

Delevingne also explained why she recently spoke up for Taylor Swift after Justin Bieber took her to task in her feud with Scooter Braun over her master recordings. She posted a comment on Bieber’s Instagram blasting him for sticking up for Braun while not “respecting” Swift’s reactions upon hearing that Braun had bought the recordings from her former label.

“She is one of my best friends,” she said. “She’s been there for me through a lot of stuff that people don’t necessarily see. I think a lot of people diss her too much for now having like these real friendships. Taylor is one of the realist people and I will support and stick up for her whenever.”

Delevingne also praised Swift for her advocacy work for LGBTQ rights. She said the singer’s young fans “really need someone in her position to be doing it.”