BTS Tour Kickoff Brings the Noise to the Rose Bowl

Nick Jonas was among the more than 60,000 screaming fans. 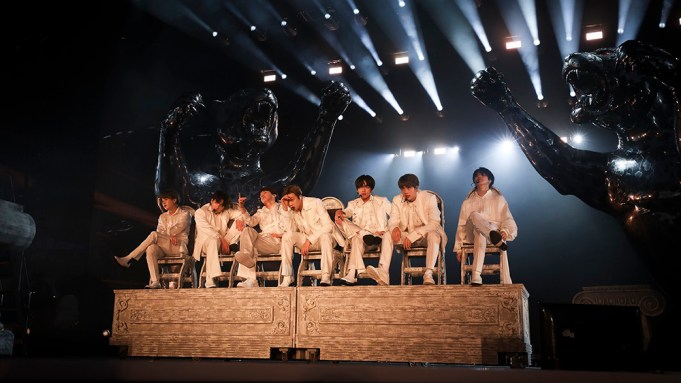 It has been a good week for BTS. On Wednesday (May 1), the South Korean group won two awards at the Billboard Music Awards (for top duo or group and best social artist). On Saturday (May 4), the septet kicked off its global “Love Yourself: Speak Yourself” stadium tour at the Rose Bowl Stadium in Pasadena, Calif. They will play the second of two consecutive sold-out nights on Sunday. Their tour also includes upcoming dates at Chicago’s Soldier Field, East Rutherford’s MetLife Stadium and London’s Wembley Stadium.

Prior to the kickoff, group leader RM told radio.com the group had some surprises for fans. “Since it’s a worldwide stadium tour, I think we [should] do something [with] bigger skills,” he said. “We should [have] new details for the new tour.”

He wasn’t speaking metaphorically when he referred to bigger. The nearly three-hour concert opened with the group clad in white, flanked by a pair of giant panthers as they performed their first song, “Dionysus.” Later, Jungkook floated above the crowd as he sang “Euphoria,” Jimin appeared out of nowhere inside a transparent bubble for “Serendipity” and various group members took turns racing down a ginormous bounce house slide during “Anpanman.”

There were fireworks, giant holographic hearts and a sea of fan-held glowing light sticks, swaying in time to the music throughout the night. And each member — RM, Jin, Suga, J-Hope, Jimin, V and Jungkook — got a turn to shine in solos designed to highlight their individuality.

Early on in the show, V said, “Rose Bowl make some noise!” The enthusiastic crowd didn’t need to be told twice. The Jonas Brothers’ Nick Jonas was among the 60,000 concertgoers in attendance and he shared a few videos throughout the evening.

As they were nearing the end of their concert, eldest member Jin said, “Thank you for making happy memories.”

And RM summed up the group’s feelings when he said, “This is the most important night of my life. … Many years later, I’ll definitely think about this night.”

BTS’ set list tends to be representative of their musical progression. This concert was no exception. The Rose Bowl is the group’s first concert since the April 12 release of “Map of the Soul: Persona” – the third of BTS’ albums to hit No. 1 on the Billboard 200 chart in less than 11 months.