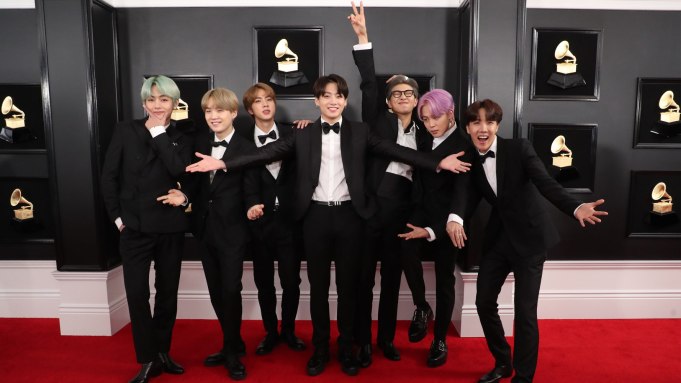 The boys of BTS broke out into song when discussing their favorite US movies and musical artists on SiriusXM’s “Morning Mash Up.”

The group, coming off a weekend that saw them perform as musical guests on “Saturday Night Live,” said they liked American films “The Big Short” and Bradley Cooper and Lady Gaga’s remake of “A Star is Born.” After answering “A Star is Born” band member RM led the group in singing the movie’s song “Shallow,” memorialized by Bradley Cooper and Lady Gaga’s intimate performance at the Academy Awards.

When asked what American artist they listen to several BTS members chimed in “Halsey” in unison. The group collaborated with Halsey on the song “Boy with Luv.”

RM said of the singer, “We became friends in like 2017. We met her at the backstage of the Billboard Music Awards and we met her like last year when she came to Korea. And we were just talking, ‘We should collaborate. We should work.’ And when we first got this track. Okay, then Halsey is perfect for this track. So we just called her, and boom.”

Jimin said to the camera, “Halsey, your voice is…” and gave a thumbs up. “She’s so nice,” RM added.