Continue to Variety SKIP AD
You will be redirected back to your article in seconds
Dec 7, 2019 2:12pm PT 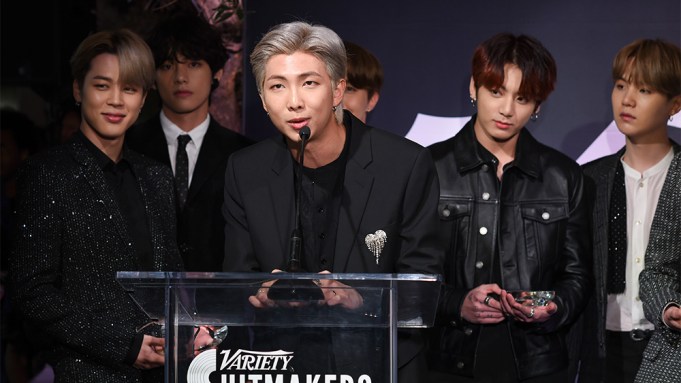 The seven-member boy band known as BTS announced that they were in the process of creating new music and an album will be out soon at Variety‘s Hitmakers brunch at the Soho House in West Hollywood on Dec. 7.

“Since we’re not very used to this kind of event, I’m very nervous, but I’m going to take it easy. First of all, I’d like to say thank you to Shirley [Halperin, executive music editor], of course, and all the editors at Variety for choosing us as group of the year. 2019 was truly a very surprising and exciting year for us; this event really made it even more special,” RM said. After thanking their producers and team at Big Hit Entertainment, he continued: “We have to say thank you and that we love you to all the Armies all over the world who always sends us the greatest love and support.”

RM revealed the good news at the end of the speech: “The great news is that we are currently working on our new music and new album and can’t wait to share them with you guys in the near future. I hope you guys are so excited to discover what BTS has in store in 2020.”

BTS was honored among several others at Variety‘s Hitmaker awards, including Billie Eilish for hitmaker of the year and Megan Thee Stallion for breakthrough artist of the year. Kacey Musgraves and Lil Nas X were also in attendance — to support Jason Owen and Ryan Tedder — and exchanged numbers.